How to generate a buffer outside polygons having a given pixel value?

For example, I would like to build a 20-m buffer (represented in yellow in the image below) outside polygons having a value of 2 (represented in green) and to assign the value of 3 to buffer cells. 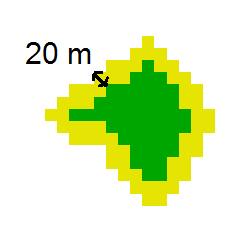 I tested the function buffer (package raster) but all buffer cells (including those of original polygons) have the same value.

Here is a reproducible example to build the raster with cell polygons.

Some simple raster arithmetic should sort this out for you.

First make a raster where its NA anywhere except where the original was equal to 2:

Now we can buffer that to 20m:

Now the ring of the buffer is where rp2 is NA and rp2b is not NA: 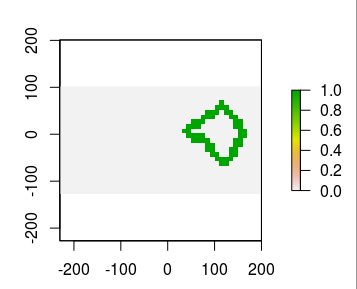 This should give you a raster which is 1 in the buffer border and zero inside and outside (see screenshot). You could then add this to your original raster or whatever you want to do with it. I think this does what you asked for, although the colours are slightly different because of the cells with value 1 as well: 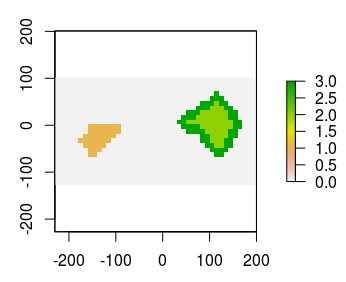 If you want you can also do this for vector data by using the gDifference function in package:rgeos to subtract the original polygon from the buffered polygon.

Simply overlay a reclassified focal mean or distance grid of the polygon indicator.

The focal mean requires a circular neighborhood w. Here is a way to create it in terms of the radius, 20. It starts with constant values (line 4). Values beyond the desired radius are zeroed out (line 5). The result is normalized to sum to unity (line 6).

With this in hand, the raster operations are fast:

The first line computes the focal mean of the indicator. It will be nonzero at any cell for which the polygon is within the radius. The second line reclassifies the nonzero values of the focal mean to 3 and overlays those on the cells outside the polygon.

For tiny test grids as in the question, this method doesn't look superior to others that might be suggested because of the overhead of creating the neighborhood matrix w. For any substantial grid, though, it's likely to be pretty fast. For instance, changing the resolution of r from 10 to 1 makes the grid 100 times larger (it now has almost 100,000 cells). The total elapsed time for the entire operation is 0.4 to 0.5 seconds: 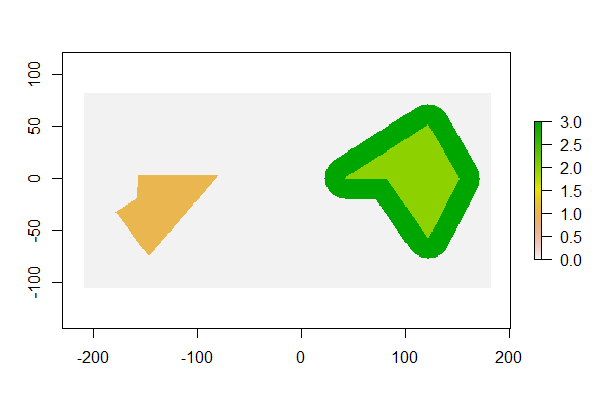 I believe that's an order of magnitude faster than alternatives such as the buffer operation.

The focal operation in the raster package does not scale optimally. On a grid with ten times as many cells (almost a million), this focal sum solution takes almost half a minute: about 60 times faster. Here's an alternative that appears to scale better for this particular package. It is a solution based on computing Euclidean distances. To do this, all the cells outside the buffered polygon must first be set to NA. Then the distance grid is computed, limited to values less than the buffer radius, and overlaid as before.

Expert users of the raster package may be able to suggest slightly faster ways to carry out these individual operations.

Not the answer you're looking for? Browse other questions tagged raster r buffer or ask your own question.

4
PostGIS Nearest Neighbour outside buffer
3
How to create buffer around point having projection 4326
1
Adding pixel value data from a raster layer to a number of buffer polygons ArcGIS
2
Buffer zone outside objects cluster using FME
4
Identifying value of closest non-NA pixel
2
How is pixel value at edges resolved?
1
Comparing geometries with having a buffer
2
How to set CRS of many rasters in R
0
Multi Ring Buffer “Outside polygons only” option grayed out - ArcGIS
0
Strange buffer of polygons in sf st_buffer()