it is the first time that I’m using the QGIS graphical modeler and I found some troubles (QGIS 2.14.1). I’m trying to count points that intersect with polygons in a vector grid, but filtering the points shapefile depending on several queries based on the attribute table. I want to do a first query and count the points, and do a second query and repeat the counting, saving both counts in the same layer. I was getting wrong results when I applied “select by expression” algorithm, even thought when I saved the selected features in an intermediate temporal shapefile before perform the counting. Using this model, I get in both counts the same results, just the one that correspond with the last selection. 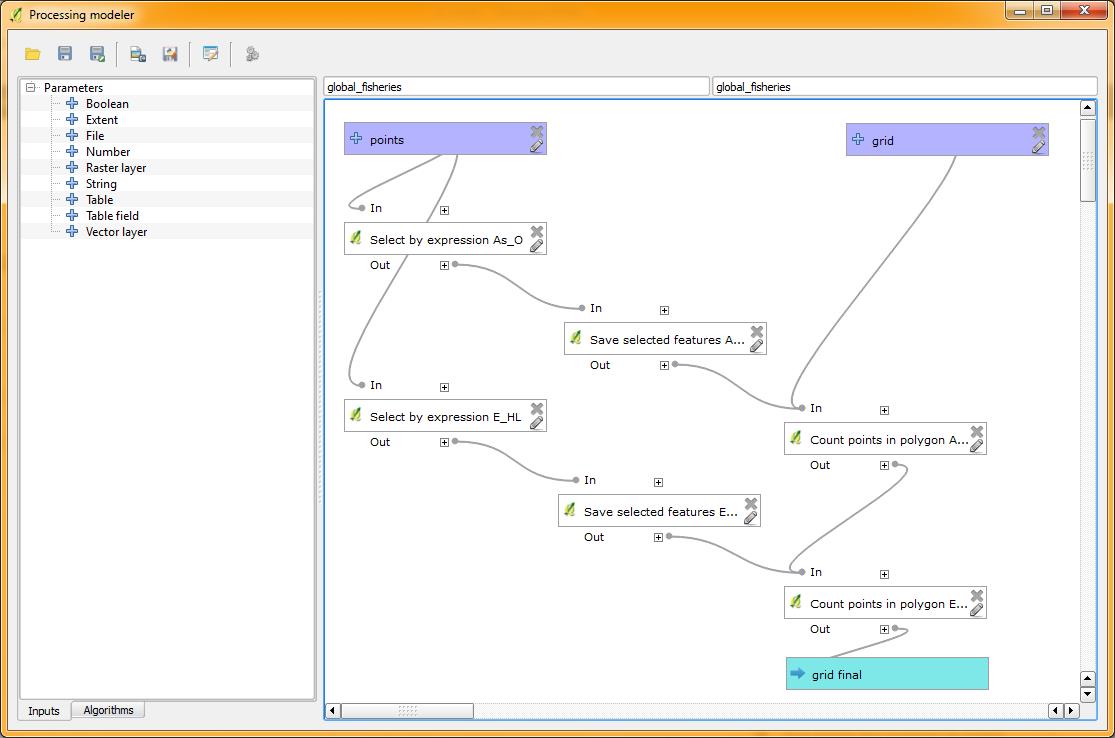 Looking for in the web how to solve this problem, I found a solution in this question QGIS modeler: select by attribute wrong results , using “Extranct by attribute” instead of “select by expression” algorithm. If I’m not wrong it seems that it is a bug, so I will report that problem. 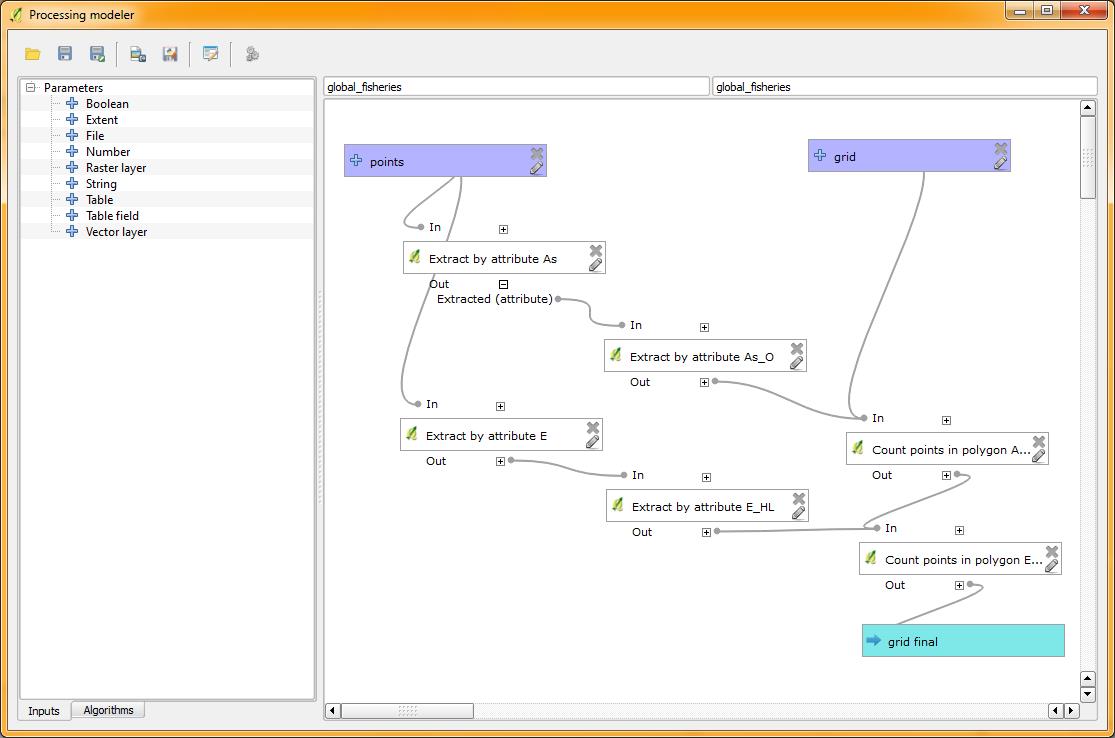 However, what I noticed is that if I perform the counting with the modeler take much more time that using the option that is in menu Vector>Analysis tools>Points in Polygons. I have read in the change log of QGIS 2.14, that PointsInPolygon processing algorithm is many magnitudes faster. It is really faster, but not when using the modeler. My question is if is there any way to use the new processing algorithm in the modeler?

qgis geoprocessing qgis-modeler
Share
Improve this question
edited May 13 '17 at 7:37

I think you are a little confused. The Vector > Analysis tools > Points in Polygons tool is not part of the Processing plugin, it is a core tool of QGIS. There are some tools from both the said plugin and core QGIS which are similar. However, you will have to use the Processing plugin version of the tool in the modeler.

The QGIS 2.14 Changelog does indeed mention:

However, there is a possible issue if you have previously installed QGIS which is that the python script for the tool (in the Processing plugin) seems to vary slightly between the one bundled with QGIS 2.14 and the recent 2.12.2 version (which is normally in /.qgis2/python/plugins/processing): 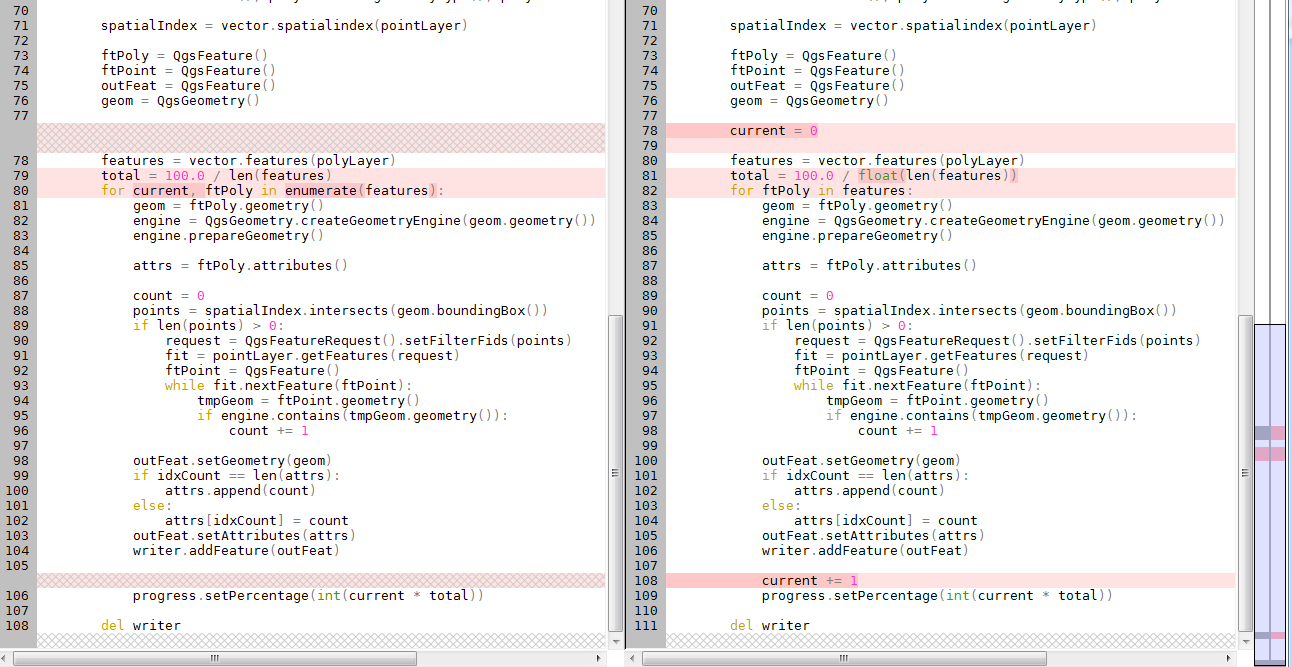 Where the left script is the one bundled with QGIS 2.14; the right script is from Processing 2.12.2. The coloured lines shows any differences between the two scripts.

Not the answer you're looking for? Browse other questions tagged qgis geoprocessing qgis-modeler or ask your own question.

2
Select by location is not working in the processing modeler
5
Where is the "input point vector layer attribute" in the "Count Points in Polygon" in QGIS 2.18.9?
3
count points in polygon returns wrong counts in QGIS 3.0.1
2
Converting selected polygons to lines in QGIS modeler
5
Select by Expression in QGIS Graphical Modeler
1
QGIS refactor field in processing modeler
5
Using Set Z Value in QGIS Graphical Modeler - Modeler not passing elevations from field
2
Assigning id from a polygon to new field in intersected points using the Graphical Modeler in QGIS
3
Using variable input in select by expression does not work in QGIS Modeler