I am trying to plot the average of several polylines (up to 40). I have several shorelines of a short section of beach plotted from different dates and would like to plot their average position.

Is there a tool that will allow me to do this?

I just cooked up some R code that uses a very simple algorithm. Assuming each trace represents a coastline from the same start and end point, parameterise each trace onto (0,1) by length of trace, so that (0) is the start, (1) is the end, and (0.5) is the point half way along the trace, measured from point to point. Then for a set of such parameterised traces, compute the average of the locations of each trace over a sequence of 100 or so parameters from 0 to 1.

Example image shows 8 traces in black and the average in red. If it wasn't Beer O Clock on a Friday I'd package this up on github now, but if there's interest I'll do it sometime later. 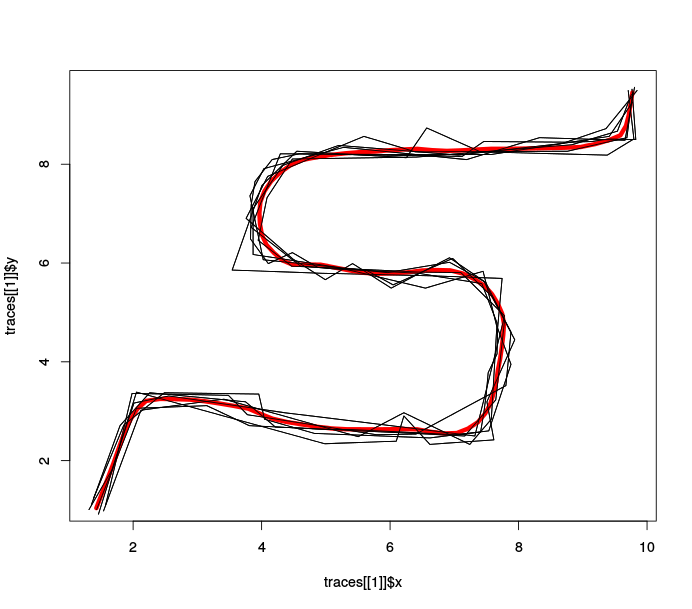 The code is here: https://gitlab.com/b-rowlingson/meanline/tree/master - I know you can't run R code easily in ArcGIS but it would not be too hard to convert to Python and run that way.

I needed to produce an average 30-years 200mm Isohyet but only had lines delineating yearly 200mm isohyets. My workflow was as follows:

Sure, it's cumbersome, but it works, and can be done in 10-15 minutes using a model builder.

In this example, the raster is the sum result with the darkest blue being 30 and darkest red being 0. The black line the resulting average. 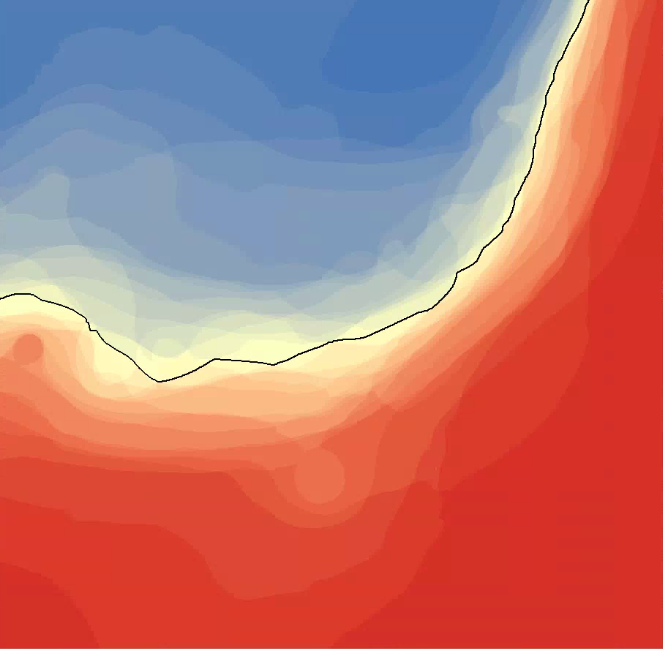 DSAS may be incompatible with the users OS or ArcGIS version.
There are a couple of ArcGIS/Python tools out there that may help. Look at the new ArcScripts site or the Geoprocessing tools tool gallery. You may need to do some coding too.

Create perpendicular lines to your shorelines at some appropriate spacing.

Create vertices at the intersections of those perpendicular lines and your many shorelines.

Select all the vertices that intersect perpendicular line 1, and calculate the geometric average of those points. Repeat for perp2.

The geometric average along each perpendicular line is used to construct a new line that represents the average shoreline.

I ended up using DSAS to calculate the average position by using transects that were perpendicular to the shorelines cast from a straight baseline. I then used the linear referencing tool create routes to turn the baseline into a route. As it was needed in that form to allow the use of the make route event layer tool.

Not the answer you're looking for? Browse other questions tagged arcgis-desktop line or ask your own question.

18
Statistically calculating real road from set of GPS tracks?
1
Creating polyline which is average of multiple other polylines?

3
From point to Grid of polygones or polylines
1
Creating polyline which is average of multiple other polylines?
1
Interpolate dxf polyline vertex elevation from DTM?
2
Calculating median of multiple polylines in ArcGIS for Desktop?
2
Plot a point at a user input distance perpendicular to a polyline
0
Adding vertex set distance from first or last vertex in polyline?
2
Filled contour polygons from Terrain50 polyline contours
2
Comparing identical polylines direction in ArcMap
2
Averaging polylines from a number of lines