How to show "First Vertical Derivative of the Magnetic Field" survey data on a map?

I will be given a magnetic survey raster and I am being asked to display this on a map as a "First Vertical Derivative of the Magnetic Field". I've done this before with a different older dataset but I basically tried to match the raster colour ramp to a an example of a hard copy map.

I am not a geoscientist or geologist but I would like to understand (in a nutshell) what "First Vertical Derivative of the Magnetic Field" is and how to correctly symbolize it on a map.

I've seen some examples on the web and it seems fairly straight forward but, is there a predefined universal way of displaying this type of data?

This question practically answers itself once you unravel the meanings of the words: "first", "vertical", "derivative", "magnetic", and "field". Let's take these in logical order rather than the order in which they appear. To begin with, the "vertical" in "first vertical derivative" indicates that the field is three-dimensional, not two, so we have some interesting spatial concepts to explore as a preliminary matter.

A "field" near a point is just a quantity that is defined at that point and all its (sufficiently) nearest neighbors. Fields in physics, like magnetic fields, usually are quantities that are either (a) numbers, called 'scalars'; (b) directions (with magnitudes), called 'vectors', or (c) more complicated quantities related in controlled algebraic ways to scalars and vectors: they go by the names of 'covectors', 'tensors', and (sometimes) 'multilinear forms'. As you surely know, or have guessed, vectors--which are often defined as "quantities with magnitude and direction"--can be written as ordered tuples of scalars. Similarly, general tensors can be written as organized arrays of numbers. Technically, a magnetic field is an (alternating) tensor field of rank 2. Writing its value down at any location (even if the set of locations is limited to a surface or just a line) uses up a 3 x 3 array of numbers, but those nine numbers really depend on only three more basic ones. Most people, therefore, think of the magnetic field as if it were a vector (of three components). The magnitude of that vector is also known as its "strength."

A (first) "derivative" of a field is obtained from that field separately at each point where the field is defined. You figure it out by measuring the change in the field when you move a short distance away from your base point. Over sufficiently short distances, the change in the field is proportional to the velocity of your motion: that is, to the distance you moved and to the direction of movement. For example, gravitational potential is a field defined around the earth. When you move in certain directions, called "horizontal," the potential does not change: its first derivative in all those directions is zero. In other directions, the potential does change. The rate of change tells us the gravitational force. It takes three numbers to fully describe this force at any point, because the force is a vector: it has direction (two numbers) as well as magnitude (a third number). Because (to a reasonable approximation) gravity points downwards everywhere on the earth's surface, to measure the force you just measure how much the potential changes in a vertical direction: that's its "first vertical derivative."

It turns out that a magnetic field survey concentrates on the strength of the local magnetic field. This means it doesn't bother to measure direction (the way a compass would). Thus, you can take a gradiometer out and obtain lots of readings of magnetic field strength--just single numbers, like temperature--at all the points you wish to reach.

If "vertical" truly means "straight up" in the field (rather than straight up on a map), as I suspect it does, then your raster must be representing the vertical derivative of the magnetic field strength. You could measure this, for instance, by getting a gradiometer reading on the ground, then getting another reading at (say) one meter above ground, and recording their difference. This is a rate of change of magnetic strength per unit change in elevation. I'm not saying that's exactly how it is measured; there are other more direct ways it could be done (such as measuring the dip of a carefully positioned compass needle). But, however the measurement is performed, that's what the first vertical derivative is.

(Analogously, suppose you were interested in how quickly the earth's atmosphere cools off as you rise up. You could measure temperature on the surface, measure it at a point directly above the first measurement--maybe a kilometer up, so that the temperature would change enough for you to detect it--and record their differences. The difference divided by the relative elevation would be a rate of change of temperature per meter of elevation: a vertical temperature gradient. That would be a "first vertical derivative of the temperature field." It would, in principle, change from point to point. Therefore you would measure this gradient at a large set of points and grid them. There's your "first derivative of the temperature field" survey.)

Now that you get the idea, you see that this thing you're mapping is no different than any other scalar field: it's simply a number that varies from point to point. As with any other scalar field, whether it be temperature, elevation, snow cover, or anything else, you can apply any principle you know concerning the visualization and analysis of such fields. This is where your GIS analytical skills come in and what makes them potentially so useful in so many application domains. In short, if you know how to make good maps of elevations, you can apply those skills to make equally good maps of a first derivative of the magnetic field. Only the interpretation is different.

It's likely that the people interpreting these data are used to particular forms of data presentation, just as many people interpreting elevation data become accustomed to a particular form of map: a shaded relief map, or a contour map, or a shaded contour map with a conventional blue-green-brown gradation, or whatever. In particular, the magnetic gradient people are probably looking for anomalies (at least ones that can be distinguished from noise). Therefore their cognitive needs are different than those of, say, the geographer seeking to describe landforms in a DEM. You should learn what the objective of their visualization is and you should research such conventions, if they exist. Use them at least as a point of departure for any improvements you might suggest. But remember, just as there is no "universal convention" for representing elevation maps, there cannot be any universally correct or best way of visualizing magnetic gradient rasters. There is room for creativity here if you wish to use it. 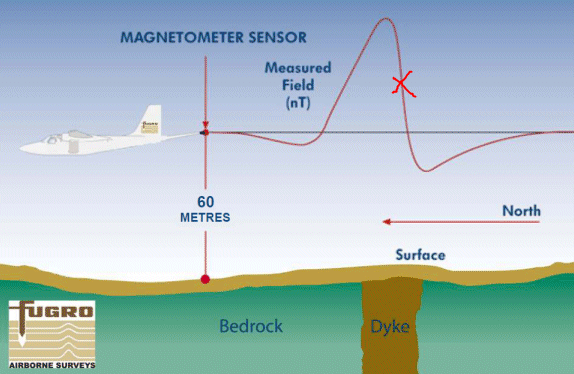 Here is a graphic taken from this article about gravity surveys. I've added a red x marking the spot where the slope of the curve appears steepest. Notice how it falls directly above the dyke. I think (?) this illustrates what @whuber is talking about. (I would put this as a comment but images in comments are not supported.)

Not the answer you're looking for? Browse other questions tagged raster cartography land-survey or ask your own question.

7
How can I calculate the vertical distance to the nearest water?
1
How to organise species inventory data by survey plot? Mapinfo
7
What does map scale refer to in map making / field survey metadata?
3
How to display survey calls using the traverse tool?
5
ArcGIS: Legend patches turn black with negative contrast
1
Open Traverse Method for the map survey