In hydrologic terrain analysis is there a difference between "pits", "depressions", and "sinks"?

In hydrologic terrain analysis is there a difference between "pits" and "depressions"?

For instance, Planchon and Darboux (2002) state

Spurious pits in digital elevation models (DEMs) are traditionally removed by filling depressions, often creating flat regions that lead to inaccurate estimation of landscape flow directions. In this study, a physical approach based on a simple landscape evolution model is proposed for DEM pit removal.

There is a difference, and I recommend the typology presented by Lindsay (2015) be used.

Lindsay (2015) presents a typology which defines a pit as a single cell in a DEM whose elevation is below that of the surrounding cells and a depression as a region of cells which drain inwards to a pit. This is consistent with the definitions used by O'Callaghan and Mark (1984) in one of the earliest papers applying algorithmic approaches to digital elevation models: "a pit is defined as a point none of whose neighbors have lower elevations" and "the 'overflow' point was defined as the point which was on the boundary of the basin and which had the minimum elevation difference to the pit." 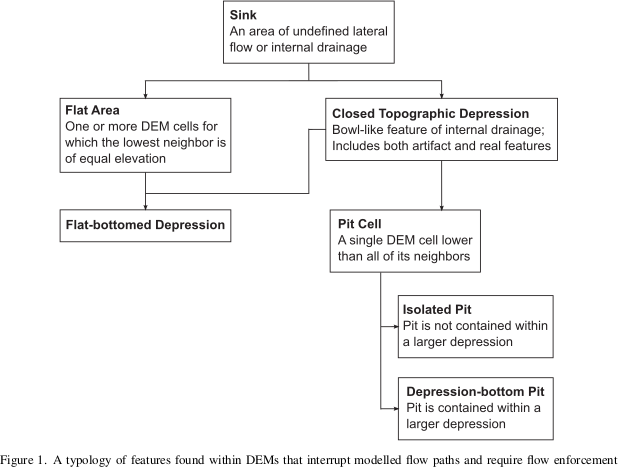 To establish the relative frequency of terms, I performed a quick literature search.

Not the answer you're looking for? Browse other questions tagged dem hydrology terrain depression-filling or ask your own question.