Why does the difference between two overlapping rasters exist?

I have two similar rasters of the Mount Vesuvius: one spans 20 kilometers, and the other one 50 kilometers. Both rasters are in WGS84 geographic coordinate system, and they overlap between each other: 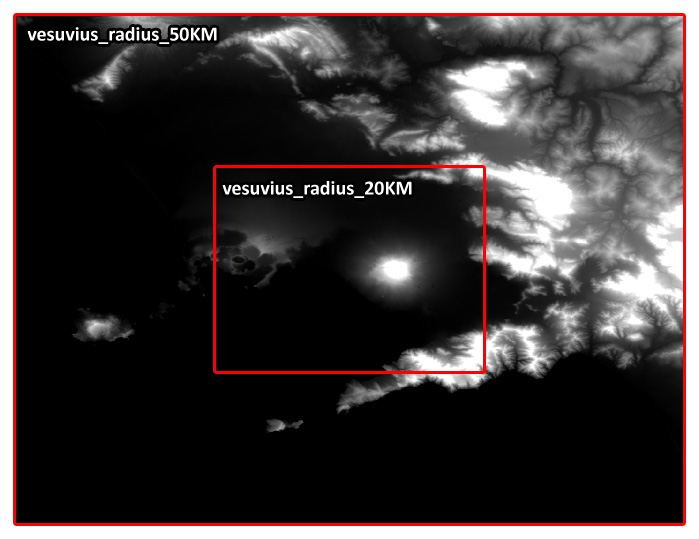 When I use QGIS Raster calculator to calculate the difference between them, a new raster file is created which is totally black - so it shows that there is absolutely no difference in pixel values on the part where they overlap: 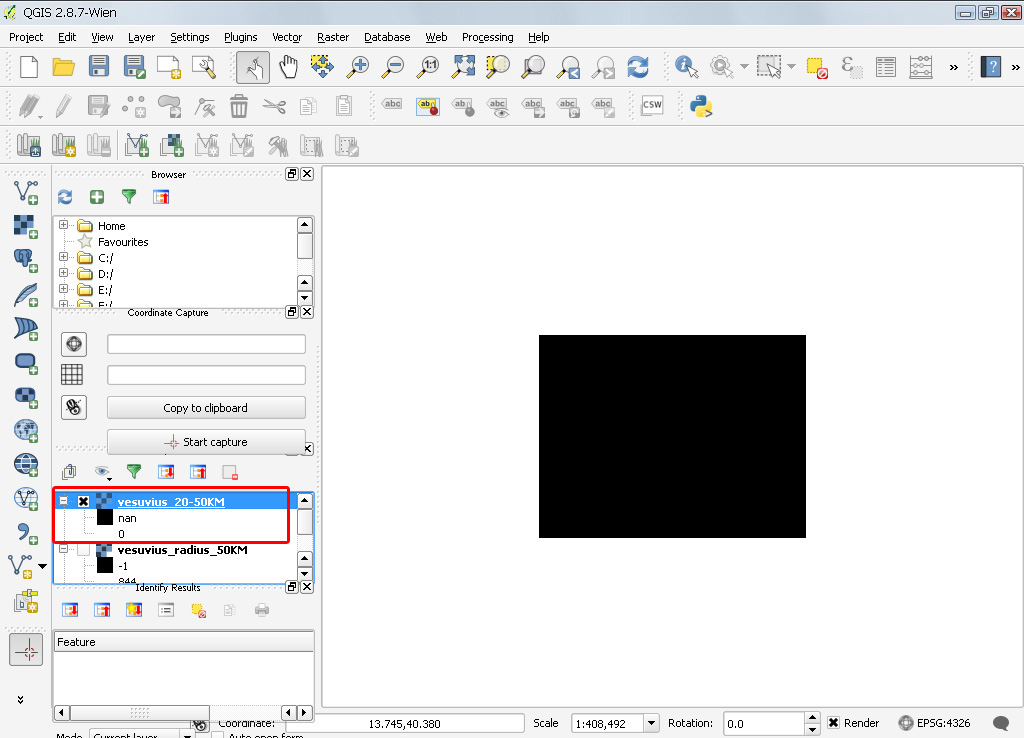 However, when I project both rasters to Azimuthal equidistant projection, and again check for the difference with Raster calculator, the difference between these two reprojected rasters exists! Here is how it looks like: 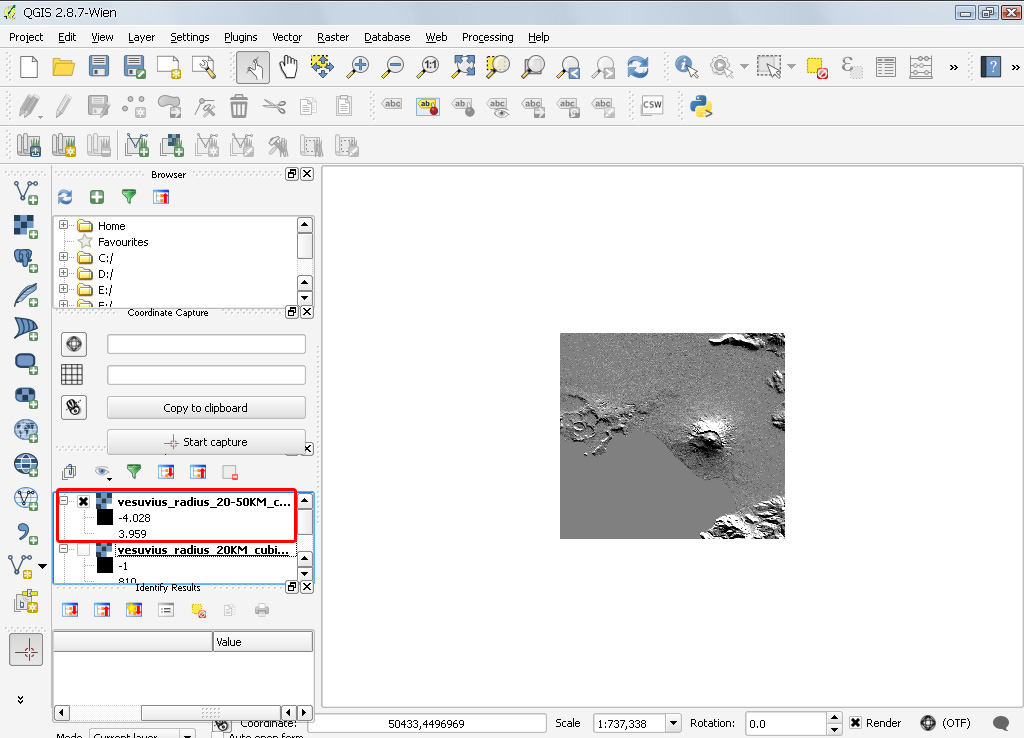 Why is this so?

The difference does not exist between the two rasters when they are in WGS84 geographic coordinate system, but once they are projected to Azimuthal equidistant projection, a significant difference appears?

I used the cubic resampling method, but I got the similar upper difference with the bilinear one.

Just for the sake of checking, I tried using Transverse Mercator projection (instead of Azimuthal equidistant), and again a difference exists between initial two projected rasters. Why is that so?

To project them to Transverse Mercator:

Here are the initial raster files (in WGS84):

And the difference between two Azimuthal equidistant projected rasters:

raster coordinate-system
Share
Improve this question
edited May 15 '16 at 6:48

If you reproject a raster to a different projection, the cell sizes do not match to the original. For this reason, the new cell value will be calculated with respect to neighbouring cells as a weighted mean value.

To clarify, I have created vector grids from your raster files, with the same extent and cell size: 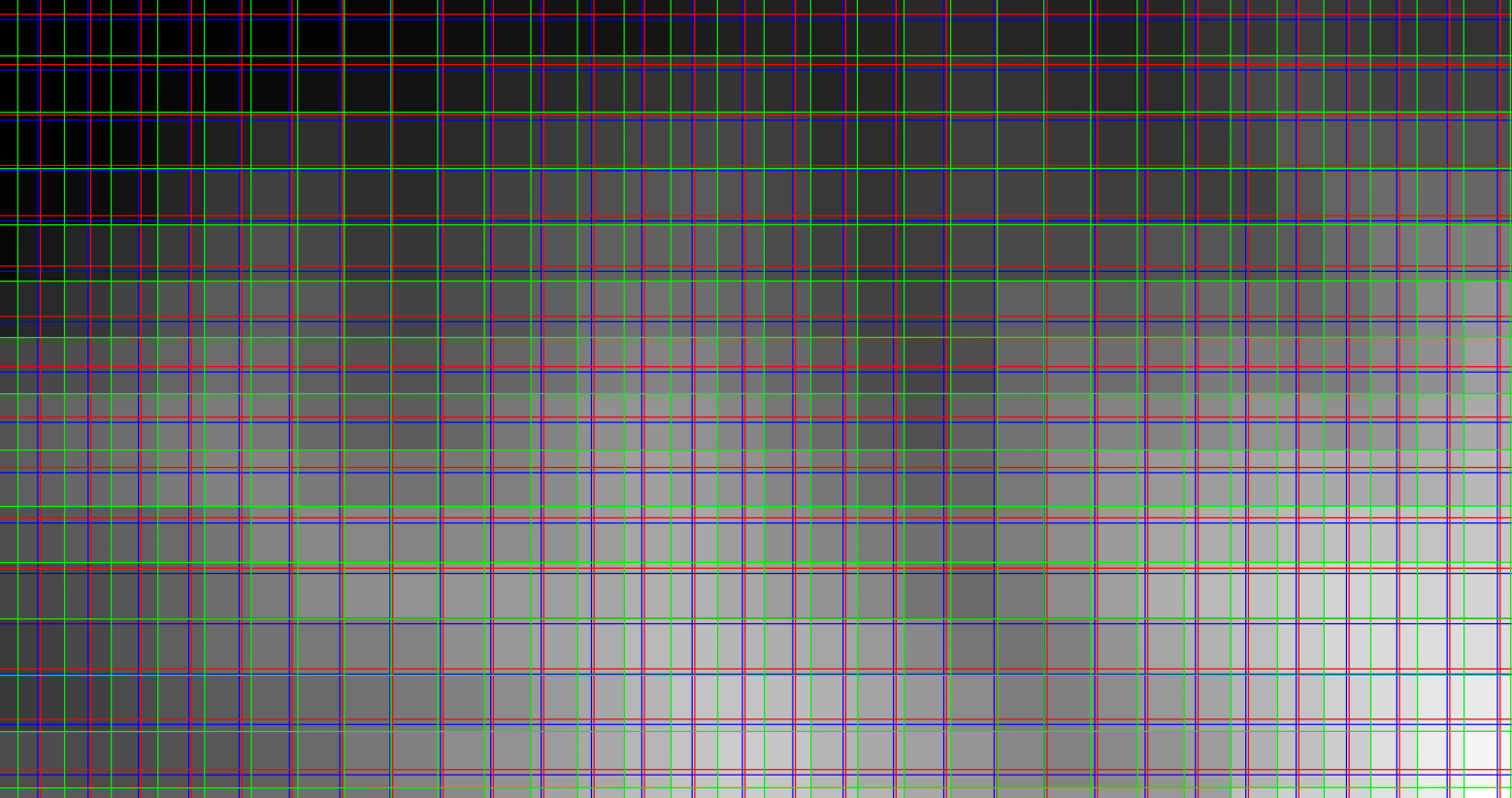 After reprojection, the rasters are not exactly rectangular anymore. GDAL tries to create a raster size almost fitting to the original. To get a full number of rows and columns from the new extent, it gets different spacing for the 50km and 20km gird. You can force the cell size to a certain value with -tr option in gdalwarp, but the grids may still be shifted against each other. You would have to define the target extents with -te as well to make sure that both rasters align.

Not the answer you're looking for? Browse other questions tagged raster coordinate-system or ask your own question.

1
Why does Transverse Mercator projection have scale factor?
4
Re-projecting from Polar projection to EPSG:4326?
1
Issues with getting the height from SRTM gdalwarp WGS84(EPSG:4326) to Mercator(EPSG:3857)
3
projection conversion from local to UTM
8
Why do “stripes” appear on raster?
7
How to calculate the difference between two rasters in QGIS?
2
What is the difference between the the_geom and the_geom_webmercator in CARTO?