Distance between points along polyline ArcGIS for Desktop (pt. 2)?

I read over the solution in Distance between points along polyline ArcGIS for Desktop? and I have a slight variation of that problem:

I need to find the distance of each red point (transformers) from the yellow point (the main generator) along the distribution network. 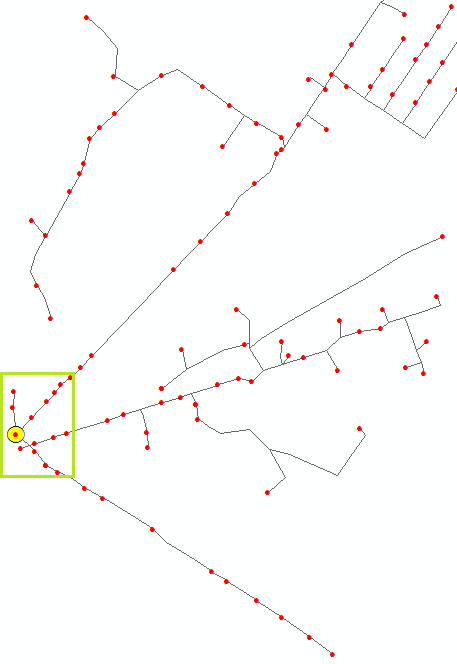 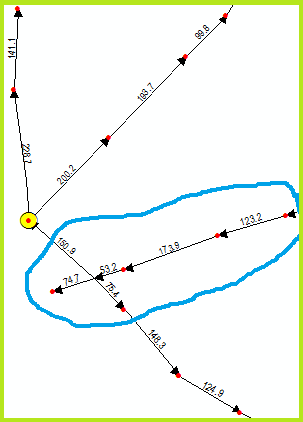 Each transformer receives power from the main generator. I've included a screenshot of (a) large-scale view and (b) small-scale view (green box). Each line has a distance attribute in feet, which I've labeled. The lines do not inherently "flow" toward or away from the generator, directionality is arbitrary (see blue circled).

A line exists between each transformer, so we never need to find a "midpoint" distance per-se, transformers always intersect line endpoints/startpoints.

If there are multiple routes to reach the main generator, we need to find the the shortest route (I believe there is always only one conceivable route from transformer to generator in this data, but just in case...).

What is the best way to go about this?

If you want to find the shortest distance between the yellow point and any red point then this can be done using several techniques.

I would imagine by far the fastest would be linear referencing but as you have lines pointing in different directions then that won't work without time spent editing the network and ensuring every line is flowing towards the yellow point, something you may not want to do.

Next fastest approach would write code to traverse the network links computing distance, but this requires a good understanding of network topology and how to read it using code.

Now finally something alluded in the comments by @Zscott and that is the use of network analyst. You could create a simple model (so no coding required) that would generate the route from yellow point to every single other red point. Now this won't be the most efficient method but it is something that can be knocked together quickly to create polylines between all points.

Below is the model that we used:

The trick in this model is that the first add location overwrites, the second add location appends so that it only ever creates a single route between yellow and 1 red point.

This model saves out the polyline into a separate FeaureClass, it would be up to you to merge these into a single dataset.

Not the answer you're looking for? Browse other questions tagged arcgis-desktop arcpy route distance-matrix or ask your own question.

3
Distance between points along polyline ArcGIS for Desktop?