Use Only First "x" Characters from Table in qgis:selectbyexpression

I have a list of street names in this format:

And a shapefile ("input_streets") with street names in this format:

I want to select streets in the "input_streets" shapefile that are also found in the 1st list, but you can see my challenge, the first list doesn't have the street suffixes, the second list does. This means a simple expression like this won't work:

...where "strname" is just the "STRNAME" values from the first list. The suffixes in "STREET" values 'get in the way'.

I need a way to give QGIS an expression that can compare ONLY the Street Names (their Prefixes, Ignoring the Suffixes, whatever they happen to be: St, Lane, Rd, etc.)

But can this be done? Can one refer to the column heading of a table with RESTRICTIONS on HOW MUCH of the column value to USE in an expression? (ie. "give me the value in STREET but stop at the first space")

Or can one only refer to the column heading in an expression, and whatever values happen to be in that column, you're stuck with? 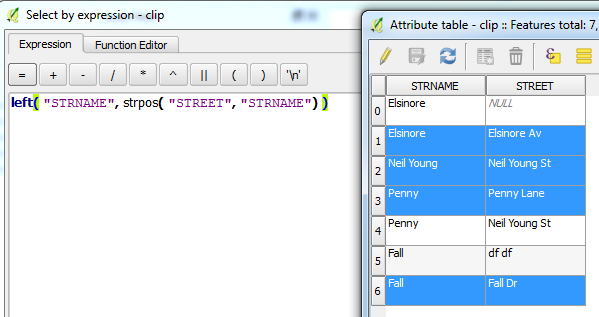 1
Copying Multiple Selections (by Attribute) to One Output Shapefile using QGIS Python scripting?
0
Correctly filling in Parameters of QGIS Toolbox Tool "selectbyexpression"?
2
Why general.runalg("qgis:linestopolygons"...) work only over first feature?
1
Python script exports only first page of composer template
2
Select only the lines that have the a group letters
1
Run processing only in layers with selection
3
Selecting only N records from layer using PyQGIS
4
Selecting only the first row of polygons around polygons