I'm trying to create a map with the world continents (with a few modifications). As a source I use a sqlite file from Natural Earth. I already introduced my modification in the definition of the continents and now I would like to merge the countries of the same continent using the table "ne_110m_admin_0_countries" into a single shape and export the result to GeoJSON format.

I use the following command:

I get no errors, but the result is a GeoJSON file containing:

Am I missing something? what is wrong in my command? Why I get the geom column inside the properties and I have an additional geometry feature?

It doesn't seem to work also if I use another output format instead of GeoJSON.

This is quite a nasty problem and hard to resolve without experience on different ways to store geodata into SQLite database. The problem is not in the output format but in the input format.

The natural_earth_vector.sqlite database is written as FDO. Read more info from the "Regular" SQLite databases" section in the GDAL SQLite driver manual page http://www.gdal.org/drv_sqlite.html and https://trac.osgeo.org/fdo/wiki/FDORfc16.

GDAL can read the plain FDO style geometries fine. However, you want to make a union of geometries with SQLite SQL dialect and ST_Union function. In this case the FDO geometry is passed to SpatiaLite engine. SpatiaLite is waiting for geometries which are written as SpatiaLite style BLOBs and when it gets FDO style blobs it does not find geometries from those. It does not throw an error either because it thinks that it did not receive geometries at all. ST_Union of several nothings is nothing and that's what SpatiaLite sends back.

What makes the problem nasty is that ogrinfo does not tell in any way for users that the database is of FDO variant. Easiest way to observe this is to open the sqlite database with spatialite-gui which recognizes the FDO metadata and creates virtual tables with fdo_ profix. 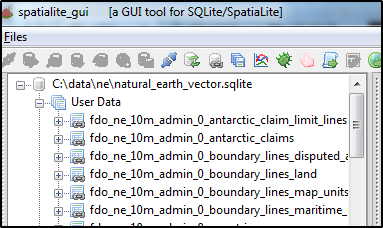 Because the data are now open in spatialite-gui one could in theory continue with it and utilize the automatically created virtual tables which are totally usable for the SpatiaLite functions. Unfortunately at least my version of spatialite-gui seems to have some bug and virtual table for ne_110m_admin_0_countries is missing.

Now you can run your query for the SpatiaLite db

and the resulting GeoJSON have geometries

Not the answer you're looking for? Browse other questions tagged gdal ogr2ogr merge sqlite natural-earth or ask your own question.

9
How do I use the Natural Earth SQLite DB with QGIS?
3
What is format of Natural Earth SQLite database GEOMETRY column?
2
OGR2OGR and SQL: selecting 30 biggest places from a country?
0
Problem importing sqlite into Postgres (with PostGis) using ogr2ogr
0
gdal and openFileGDB driver - polygons with bezier curves not exporting correctly
9
select by location using ogr2ogr sqlite
2
ogr2ogr missing geometry when selecting from one sqlite db into another