Where do I find city/town point locations in US census data?

I'm generating RF propagation maps with Splat!. It can plot cities (as points) on its coverage map. It comes with a tool to import ASCII Arc/Info Ungenerate files. These used to be available from the US Census at this URL. Now the only data I can find available is either in Esri Shapefile format or KML format. I think I can convert these to the format needed by Splat!, however, these shapefiles define the boundaries of a place, not the point (lat, lon) where the place is located (i.e. the center of Portland, OR).

Where can I find census data for the point at which a city or town is located?

data united-states census
Share
Improve this question
edited May 27 '16 at 19:15

If you are just looking for a table with city names and coordinates, I would recommend the US geographic Names file. You can download the data (Domestic and Antarctic Names - State and Topical Gazetteer Download Files) here: http://geonames.usgs.gov/domestic/download_data.htm

There are also worldwide names on the website. The tables contain many types of features, not just cities, but it should be trivial to filter by feature type. The field names should be self evident, but there is also documentation at http://geonames.usgs.gov/domestic/states_fileformat.htm

The Splat! Documentation mentions that the city file only needs to contains a city name, and lat and long, formatted as a simple comma-separated text file. This would be easy to do using the files I linked above, simply by removing anything but cities, and then removing unwanted columns.

The names and locations of cities, tower sites, or other points of interest may be imported and plotted on topographic maps generated by SPLAT!. SPLAT! imports the names of cities and locations from ASCII files containing the location of interest’s name, latitude, and longitude. Each field is separated by a comma. Each record is separated by a single line feed character. As was the case with the .qth files, latitude and longitude information may be entered in either decimal or degree, minute, second (DMS) format.

And they give an example:

One solution would be to take the centroid of each polygon to get a point set. Depending on the software you may have the option to create the new point file in the format you want instead of having to convert it later.

Example of converting geometry in QGIS 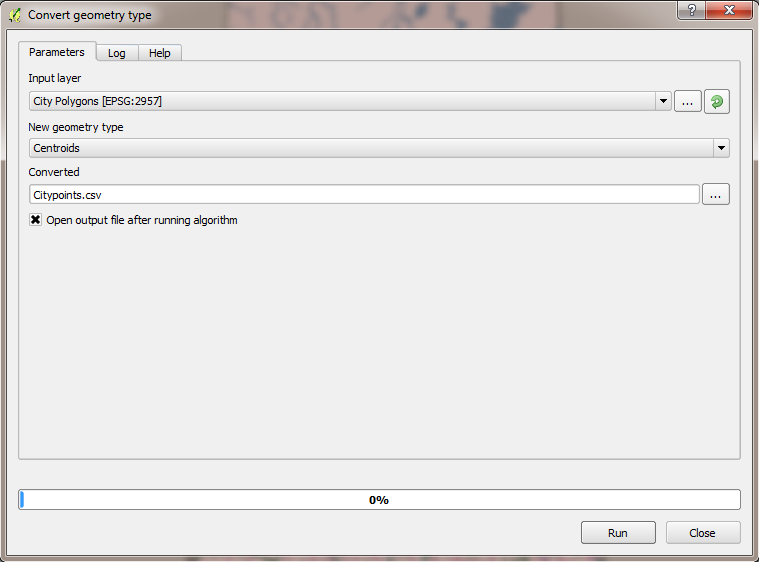 Not the answer you're looking for? Browse other questions tagged data united-states census or ask your own question.

12
API to reverse geocode latitude, longitude to census tract?
3
Where can I find the finest granularity of 2010 US census population information?
7
Where to find shapefile basemap for the Indian Ocean?
3
Where to download 10m (1/3 arc-second) DEMs?
1
Clipping Census tract shapefiles to boundaries of City Council shapefiles using ArcGIS Desktop?
0
Where can I find geodata for the Russian терсон-мо or терсон-ате census units? Or: can osm_admin polygons be linked to those?
0
How to find boundary data for cities in Utah
2
Where can I find GIS dataset (.shp, .gdb, etc) on Washington DC lead pipes?