Sublayers do not exist or are not supported in the geoprocessing tool?

I'm trying to batch export selected layers that I drag and drop in the tool that I've created by a selecting feature class. It's working when features are input from the source and layers in TOC. However, you get an error when the layers are in group layers. "Parameters are not valid. ERROR 000732: Input Features: Dataset 'Topography layers\Linear' does not exist or is not supported" 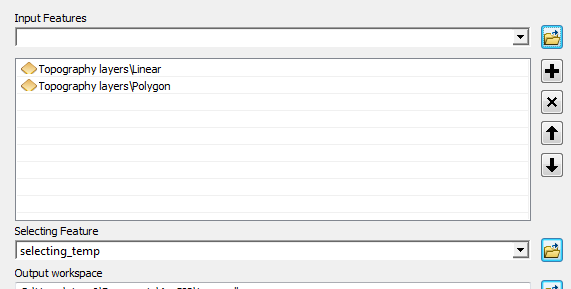 As @MichaelMiles-Stimson has mentioned, you can get around this by removing the space in the group layer name.

However as you have mentioned that you have several MXDs and layers already set up, it is a relatively small change to your code (which doesn't seem to touch the space) that will get it working.

The fc from inFeatures is passing a string like "'Topography Layers\\Linear'" (note the extra single quotes ' in there!) - if you strip out this extra set of single quotes the MakeFeatureLayer tool works:

Oddly, removing the space from the Group Layer name will also overcome this (without the need to remove the single quotes).

Alternatively (and possibly the better or more pythonic solution) is to use arcpy.GetParameter() instead of arcpy.GetParameterAsText(), which passes the layer objects rather than a text string (and then a list via your split).

This way it doesn't matter about single quotes or spaces in your layer/group layer names.

Not the answer you're looking for? Browse other questions tagged arcpy error-000732 group-layer or ask your own question.