I have a shapefile I brought into QGIS with a lot of point data. One of the data layers represents an integer value that is assigned to each position. 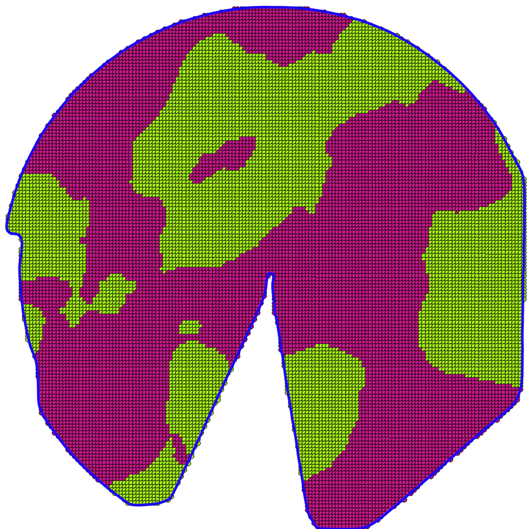 I am attempting to create a raster map of the data but I don't want the interpolation process to calculate non-integer values. I simply want it to fill in the spaces as "1", "2", etc. and change basically where they meet.

Eventually I want to create a Contour map that shows these different zones. The only way I know how to do that currently is to create a raster first and then convert. If there is another way to do that, I'd be happy to try that instead.

Is there any way to automate this process or do I have to draw these polygons manually?

You might want to try "Convex Hull" on all the points to create a polygon over the whole area. Then repeat just around the local areas. Then with some digitizing either clip/intersect/ring until you have two polygons that fit nicely together. I'm not sure if this part is necessary but with the local areas use "Singleparts to Multipart" so that only have one polygon. Then "Merge" the two shapefiles. Define the attributes so one area has '0' and the other has '1'. Then you can do as Josh K suggests and use Rasterize. This is how I normally do it.

Well it isn't pretty, but I was able to put together a string of procedures to do this. I used the Buffer feature instead of the Voronoi Polygon tool. This procedure gave me a bunch of curved lines (from the buffer circles). I would have like to see what I would have gotten back if I could have made the Voronoi Polygon tool work but that kept stopping at 3% complete and would not go any further. Anyway, here is what I had to do.

1) I first ran the Vector/Geoprocessing Tools/Buffers... tool. I used the measure tool to get the approximate distance between the points and found it to be around 9.3 meters. I used a Buffer distance of 4.7. This gave me the following map. 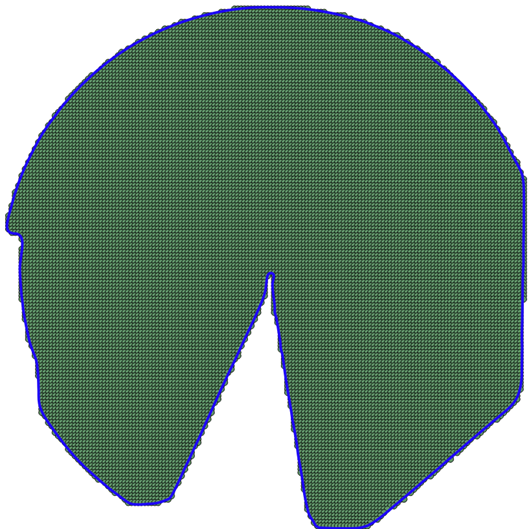 2) I then ran the Vector/Geoprocessing Tools/Dissolve... tool. I used the Buffer layer I just created as the input vector layer. I used the layer with the integers I wanted as the Dissolve field and created a new layer. This created the polygons I wanted around the various integer values as shown in the following map. 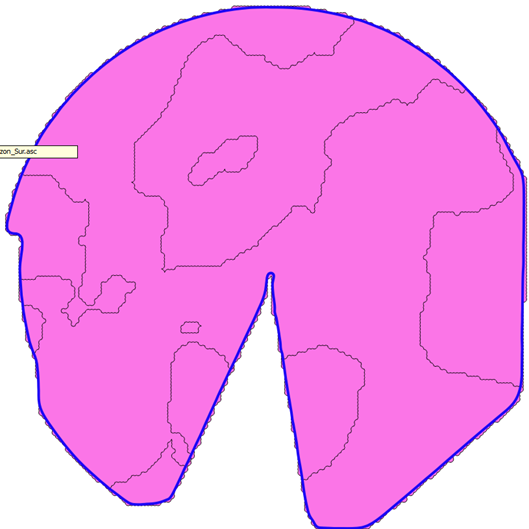 3) I then just needed to clean things up around the Field Boundary. To do this I ran the Vector/Geoprocessing Tools/Clip tool. I selected the polygons I just created and uses the Boundary to clip it. This got me to my solution as shown: 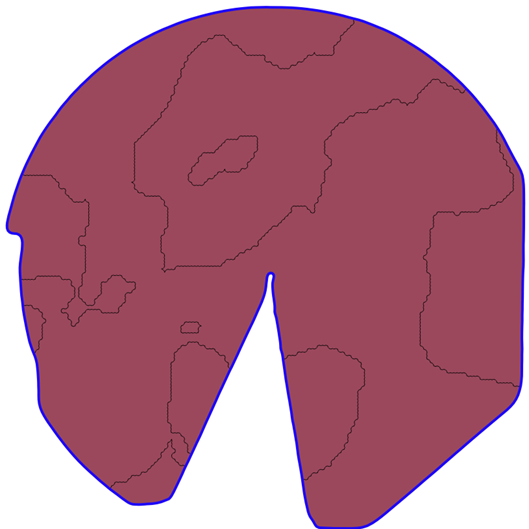 4) My goal was to create a Contour map so this got me to where I wanted. However, if I did want to rasterize it, I can use the Raster/Conversions/Rasterize tool to convert it. I then would use the Raster/Extraction/Clipper tool to clip the output to the Field Boundary again.

5) Eventually I was able to add the Legend for each soil type and get the map I wanted. 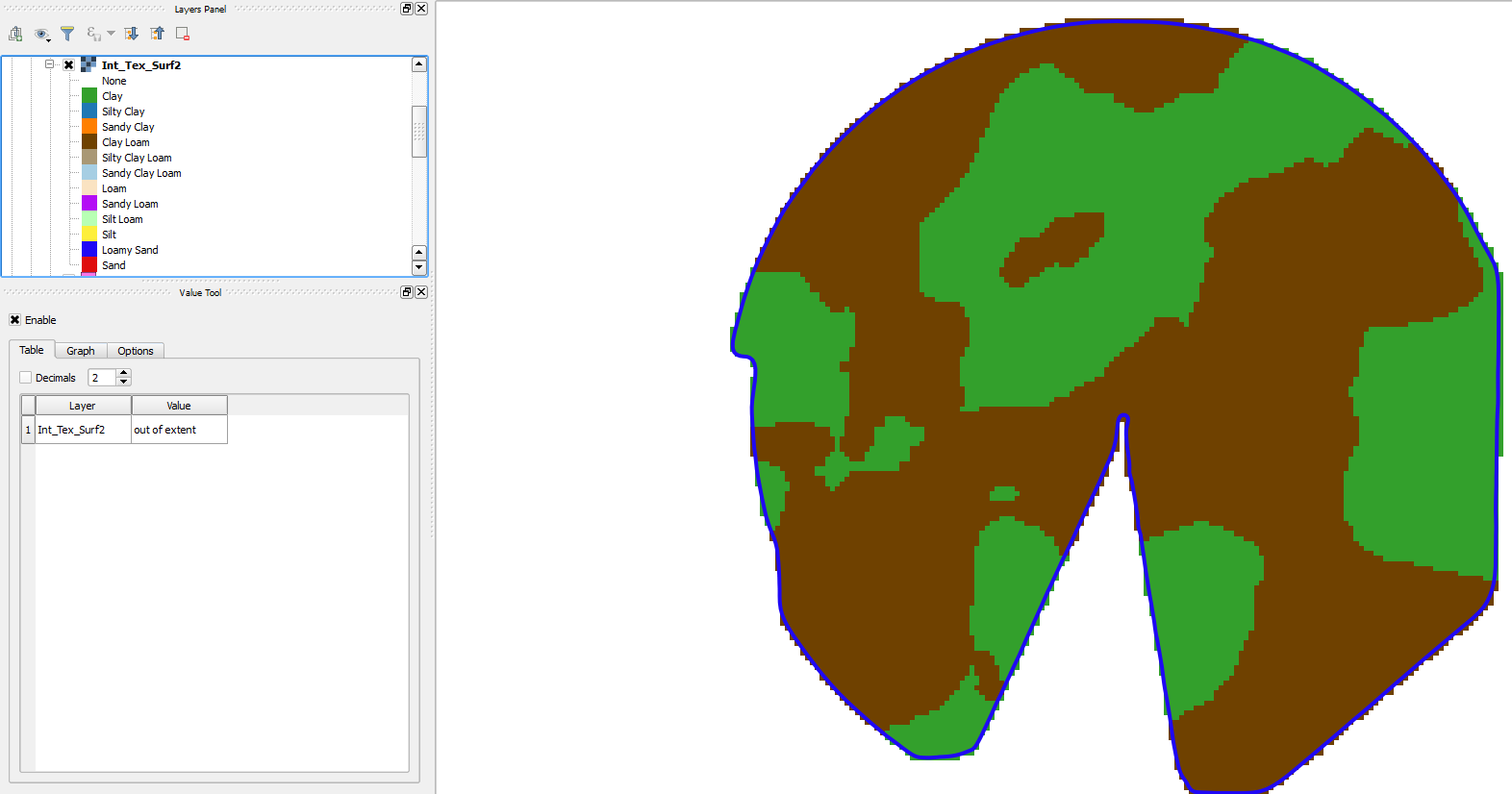 The boundaries are a bit rough, but it will work for now. If anyone has a way to do this and smooth the boundary lines more, I'd greatly appreciate some suggestions.

If the data is as regular as it looks, instead of interpolating it, have you tried just converting the shapefile to raster (QGIS-Raster/Conversion/Rasterize) based upon the integer attribute (just setting the spacing between points as the resolution)?

Not the answer you're looking for? Browse other questions tagged qgis interpolation or ask your own question.

1
Creating distinct polygon zones from interpolated raster in ArcGIS for Desktop?
0
Color gradient in symbology in ArcGIS 10.1 for interpolation raster
1
Optimized interpolation method with fixed-location sample data points?
1
How to create a bathymetric map with a irregular boundary from point data
1
Create a vector layer from a raster layer contour
3
Interpolate Coarse Raster Contours
4
Filling NA gaps in raster with R?
0
It is possible to create a raster map using a vector dataset in GeoServer?
1
Creating a clean TIN interpolation without “Bleeding” in QGIS