I have raster data that represents a probability distribution, i.e. each cell has a probability value (in my case the probability that an animal may be found in the cell), and all the cells add up to 100% (I know for certain the animal is within the extents of my raster). I want to be able to generate vector data for confidence values. For example, the 95% line/polygon denotes the boundary wherein I am 95% confident that I will find the animal.

Similarly, if I have a kernel density estimate, How do I generate the XX% line/polygon that borders the densest part of the raster containing XX% of the total population?

I am willing to use ArcGIS, or open-source software. If there isn't a tool to perform this for me, what is an algorithm I can implement?

Confidence is not an applicable concept, although it is superficially similar. The question sounds rather like you want to identify the smallest region having a total probability at least 95%. This region can be obtained (at least conceptually) by sorting all the probabilities and accumulating them from highest to lowest until the partial sum first equals or exceed 95%, then selecting the cells corresponding to the values that have been accumulated. This leads to a straightforward solution, as exemplified by this R (open source) example:

Here is the resulting image of the 95% probability region with the original probabilities shown in color: they sum to just over 95%, by construction, and eliminating even the smallest value will reduce the sum to less than 95%. The white area at the top includes the remaining 5% of the probability outside this region. The desired contour is the boundary between the white cells and the colored cells. 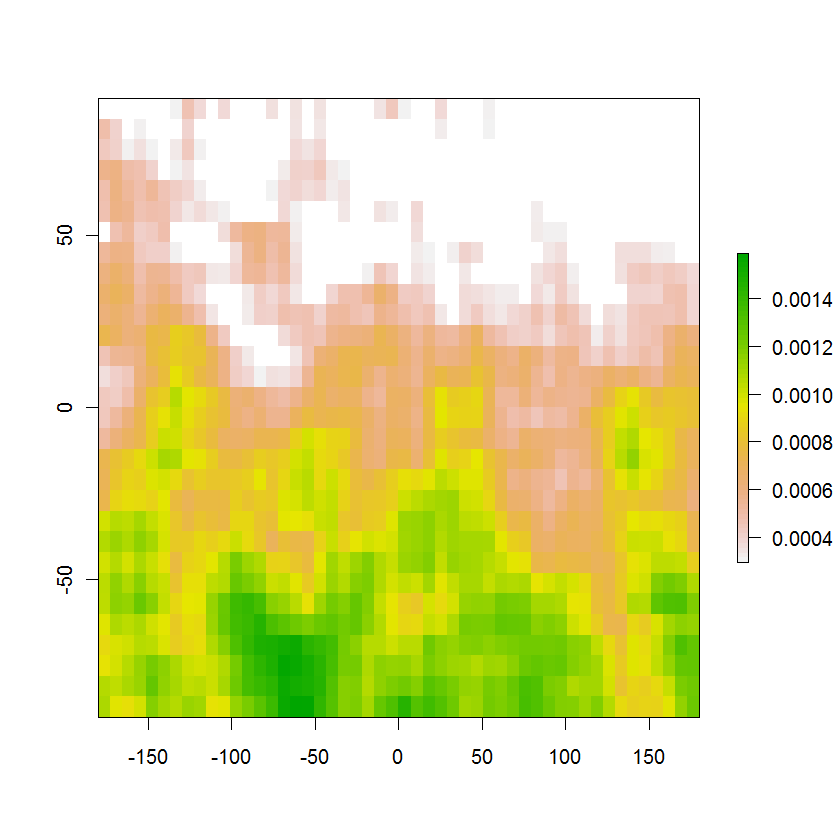 The same method will work on a KDE grid.

There is no straightforward ArcGIS solution for this problem.

This will create a vector polygon with 2 FIDs, one with the shape of your 95% confidence interval and the other your remaining raster area. I would suggest exploring the simplify option to see what results would suit your needs better.

FYI, apply the same method to get the polygons for your Kernal Density estimates.

Not the answer you're looking for? Browse other questions tagged raster spatial-statistics or ask your own question.