Removing overlap within multipart polygon in ArcGIS for Desktop?

I am attempting to remove overlapping portions of a multipart without going through the steps exporting or creating a layer from each part and clipping individually. I've looked around at various answers, it seems the answer may reside in topology rules. I admit I'm not very familiar with using topology, so I was unsuccessful. In fact it appears my rule was simply not applied. No doubt due to my incompetence.

Is it possible to accomplish some fashion of "clipping" of a multipart polygon with its own parts?

Here is what I'm doing and what I've done; I will wager someone else has done a similar task. The data is wildfire data taken from modis, essentially I am building a progression map using modis data. The data comes as points, I used minimum bounding geometry to convert the data into a multipart polygon using the Julian date from the point data. This works as I don't need dead accuracy for my purposes, it's more of a quantity over quality project. Because the process of min bounding is a bit coarse, as is the point data, I cannot simply subtract the total acres from the previous day to get acres per day. That is the data I am actually seeking. After the minimum bounding I clipped the polygon to the final fire perimeter as the process created some polygon area outside the fire perimeter. This is really where I am stuck.

I've tried some merging and dissolving based on similar questions. Perhaps I'm missing the vision in those as they have yielded nothing useful. I also tried the topology route by creating a gdb. I created topology with a rule of must not overlap for the feature data set, then exported the data from my map into the gdb as a feature class. This didn't appear to do anything, so I'm rather certain I did not do this correctly. I then fumbled around with the topology tool bar with no success. I could do a union and then pick out the issues; this is tedious. I will likely need do this process again in the future, so avoiding tedium is a plus. Ideally I could make a model with the two inputs of modis data and fire perimeter to get at the end result. My model building is another conversation entirely.

Short version: The picture below may help me explain things. The polygon is multipart, Julian day 223 is sitting atop day 224. I would like 224 to not be under 223, essentially it would be clipped by 223. This would carry on through each day. 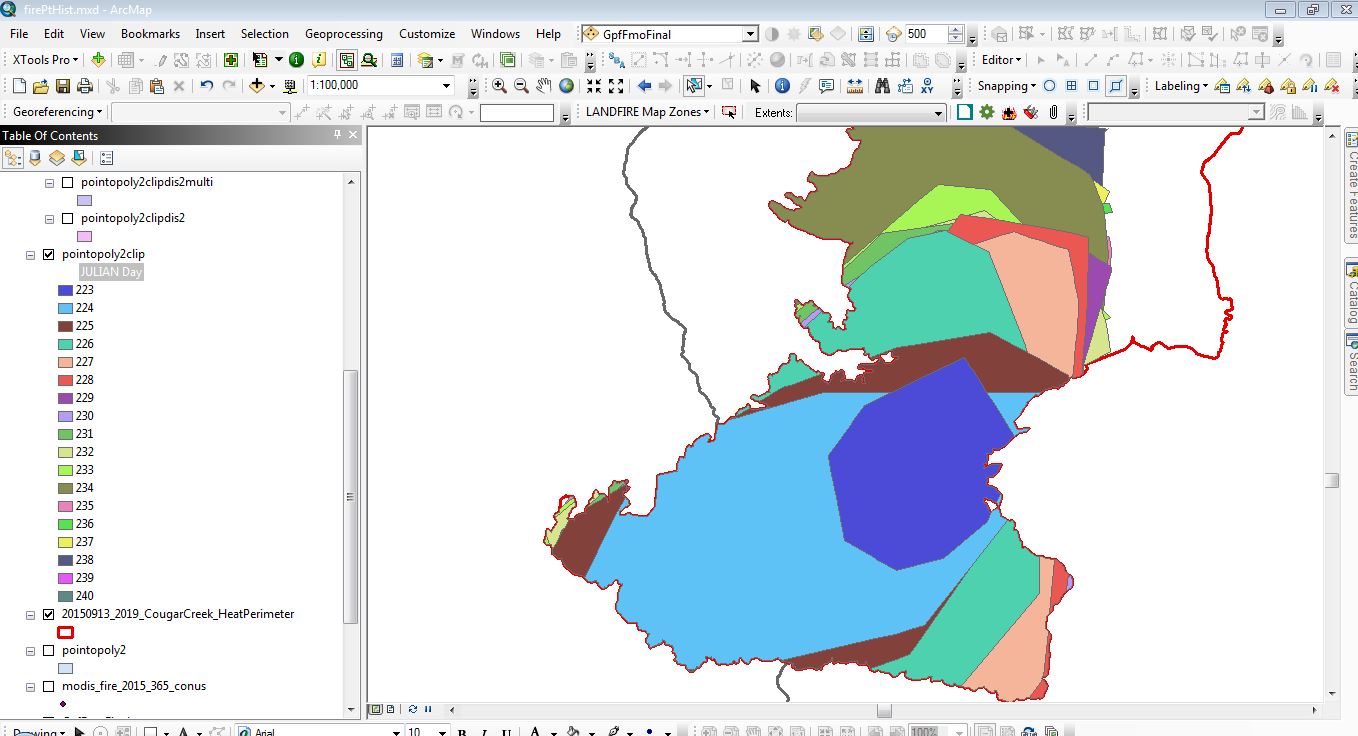