I am currently looking for a DEM containing some drumlins to perform some morphometry on it. It should be a free one, or at least to be downloaded free of charge.

I have already tried to find a free DEM for Drumlin spots in the Alps foreland in southern Germany, which failed. The point is that I need a DEM with a higher resolution than 30 meters/pixel (which would equal the 1 arcsec of SRTM). Minimum would be 10 meters, better 5 or even 1 meter per pixel. Do you know any options, at least containing drumlins?

I would look at the English Environment Agency's website which will provide you with 2m, 1m and in some areas 50cm resolution DTMs and DSMs. All you need to do is find some drumlins, this paper Subglacial bedforms of the last British Ice Sheet, Anna L.C. Hughes, Chris D. Clark & Colm J. Jordan could help.

Here's an area of drumlins in 1 metre Lidar from the Defra data. Zoom in enough and you can see the stone walls. 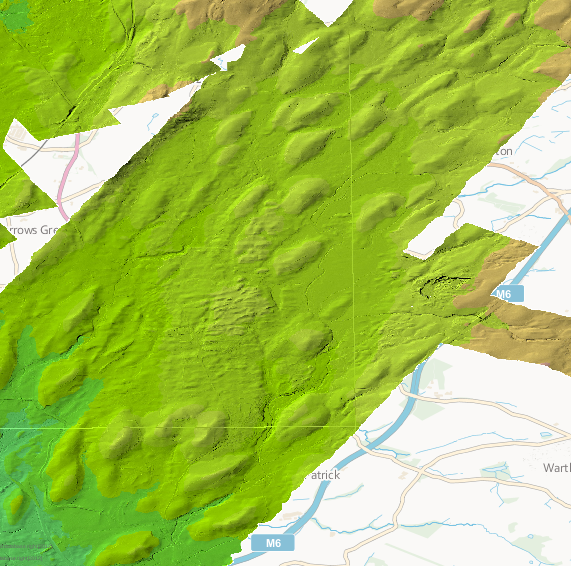 The ArcticDEM I think is your best option, it is free, it have high resolution (2m) and covers the Arctic as its name suggest (Alaska, Northern Canada, Northern Europe, Russia, etc.), so you will find plenty of drumlins there. You can check it out here: ArcticDEM

Not the answer you're looking for? Browse other questions tagged data dem or ask your own question.