How would I complete this operation? I tried the basic merge function but I don't think that works with spatial files. 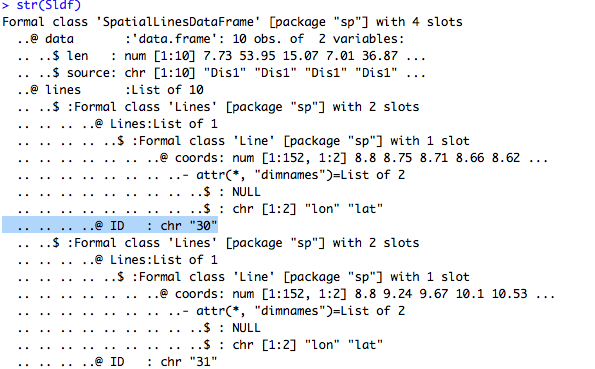 It would be helpful if you posted your code. There is now a special merge function that is called for sp class objects that addresses the sorting issues with base merge breaking the slot relationships. You can bring up help for the sp version of merge using ?sp::merge.

The slot id should be the same as the rownames in the @data slot. As such, you can use merge with "row.names" as the argument for by.x

If you receive an error, it could be due to rownames being a character vector (the have to be) and your "DataID" being numeric. You can fix this easily by adding a dummy ID feild that is created by coercing "DataID" to a character vector, ie., fsub$TmpID <- as.character(fsub$DataID) You would then use this in place of "DataID".

Not the answer you're looking for? Browse other questions tagged r attribute-table merge sp or ask your own question.

3
Merge a table with a shapefile (not the same dimension)
2
Merge Shapefiles and Add File Name to Attribute Table
2
Removing attribute from SpatialPointsDataFrame with spdplyr::select() in R
4
Writing raster with attribute table in R?
3
Merge several columns to one in attribute table, maybe coalesce with condition?
0
Modifying the TIFF's attribute table value with R
2
Specifying color in ArcGIS Pro from the external text file for Attribute Table function