Ordered Landsat 7 data from USGS and wants to download it using the Bulk Download application. However, i get this error while running the software. 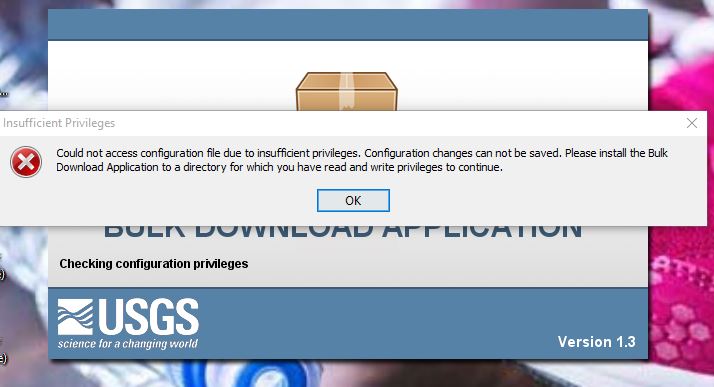 I have JRE Installed properly. Does someone knows how to got about this Insufficient error problem.

There are other options to download Landsat7 images. Here's what I do:

P.S. I myself had problems with the bulk downloader and I found that this way is better.

I had the same issue when installing to the default location Program Files. I uninstalled the first attempt, and reinstalled to a custom folder on my drive (C:\LaptopSoftware\USGS_EROS\AppInstall).

I've encountered the same issue and it is resolved by changing the directory. So, change your file directory to Driver Volume /D (if you have a partition of driver in your PC)

You should run bda.exe as admnistrator. Furthermore, its a good thing to install it outside the 'program files' folder.

Now I encountered a problem with high CPU usage, bda.exe was using 100% of CPU. But i found a way to limit the number of processors for it to use: (Task manager -> Details -> right click on bda.exe -> affinity -> let just 2 or 3 processors for bda, it's more than enough), it worked well.

I experienced the same problem - easily resolved by changing the default installation folder from "Program Files" to (in my case) the main C drive.

Not the answer you're looking for? Browse other questions tagged remote-sensing usgs landsat-7 or ask your own question.