Why is GeoTIFF squashed in WGS84 data frame of ArcMap?

I have a government-sourced geotiff which I have imported into ArcMap 10.4 as a raster basemap. In a TIFF viewer it displays correctly but in ArcMap it appears vertically squashed by roughly 20%.

The data frame coordinate system is GCS_WGS_1984 WKID: 4326. And here is some data provided to me along with the tiff file:

Why does it appear squashed, and how can I fix it?

I found this but it did not seem to help: https://geonet.esri.com/thread/34535. Unable to independently verify the geotiff is WGS84. I am running Windows 10 Pro under Parallels on a MacBook Pro.

What is stranger, I also have a KML map of the same area and when I alternate between the two maps in ArcMap, by disabling one of them, I can see that they are exactly coincident. In other words, both are squashed, by the same amount.

The only thought I had was that one degree of longitude, in metres, varies with the cosine of the latitude, and coincidentally 1 - cos (33.5) is about 20%. Could that have something to do with it? Clutching at straws here.

Why does it appear squashed? In the TIFF viewer, the map is in the correct proportions. When a Google map of the same area is overlaid, it matches on-the-ground features almost exactly.

When you bring the image into ArcMap, it uses the WGS84 geographic projection as stated in your data frame CRS. 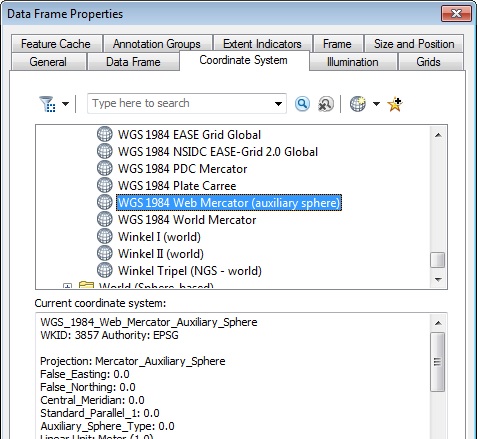 Not the answer you're looking for? Browse other questions tagged arcgis-desktop arcmap coordinate-system geotiff-tiff arcgis-10.4 or ask your own question.

3
Changing Data Frame display units in ArcMap?
2
Does Coordinate System of ArcMap data frame have to match at least one of its layers?
0
Why is ArcMap not clipping to Polygon?
3
Projecting vs. export using data frame projection?
2
'Bring forward' Data Frame Extent Indicator in Arcmap
1
Convert geotiff to wgs84?
2
WGS84 expressed in meters - default projection in ArcMap