My JSON data is a simple array of objects:

I then start my webmap, etc:

Then below this I try to add a field to the layer, and populate with JSON. Here's what i've tried:

But this didn't work. I tried logging Object.keys(layer) and got a long list of keys, of which one is graphics, however, graphics doesn't seem to have any information with it.

I also tried calling map.redraw() after the loop, but that didn't help. There is an example similar to what I'm trying to do here: http://cartographicperspectives.org/index.php/journal/article/viewFile/cp76-hunt/1311 and they use arr.forEach, which is apparaenlty part of dojo?? I'm trying to accomplish the join using vanilla js.

So I also tried the layer.attr() method in the ESRI api. Since its a layer method I assume I need an array of graphics to use it. But when I call console.log(layer.graphics.length) i get 0.

So is it possible to programmatically add a field, and do a join such as this to a feature layer? I.e. add a field and populate it from JSON?

I think you're close, just a few notes about what you need to do to get this working:

I have all of the above incorporated into a sample. You can see it working by clicking on Alabama or Alaska and see your "NEWFIELD" in the list: 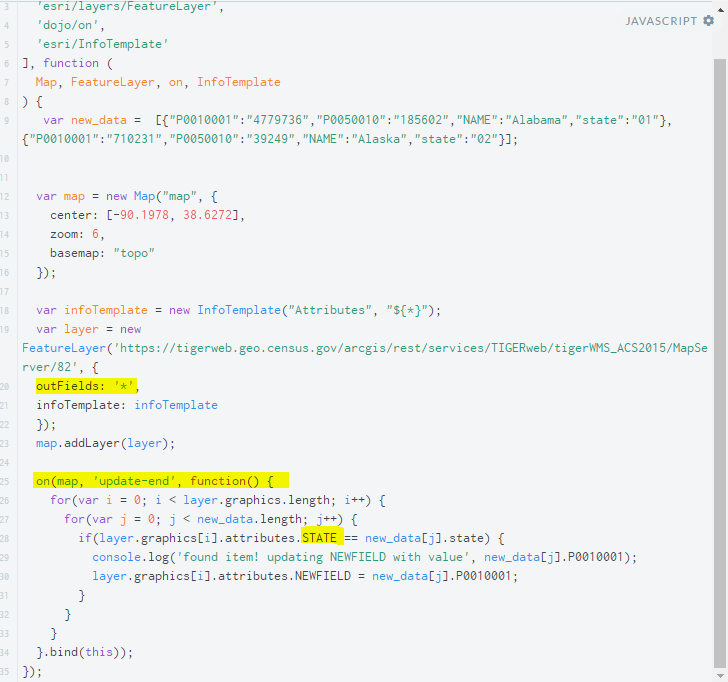 3
Populating a Dojo widget with country names based on an ESRI hosted layer
1
How to get the TOC to update after adding a new Layer in the ESRI JSAPI?
0
Populating combobox and zoom to selected field in box?
1
Prevent Editor Widget auto save
2
Appending Data to FeatureLayer in ArcGIS API for JavaScript?
0
Adding layer name and field entry where clause
2
Feature layer is in WGS 84 and Esri map is Web Mercator
0
Adding feature layer in ArcGIS
0
Auto-populating field from another feature layer in Survey123 using JavaScript