The use case is simple: extract all the buildings from OSM via osm2pgsql.

In the process, it seems other entities make it into the polygons list, such as "islands", only because they have the "building=NULL" tag available, such as: 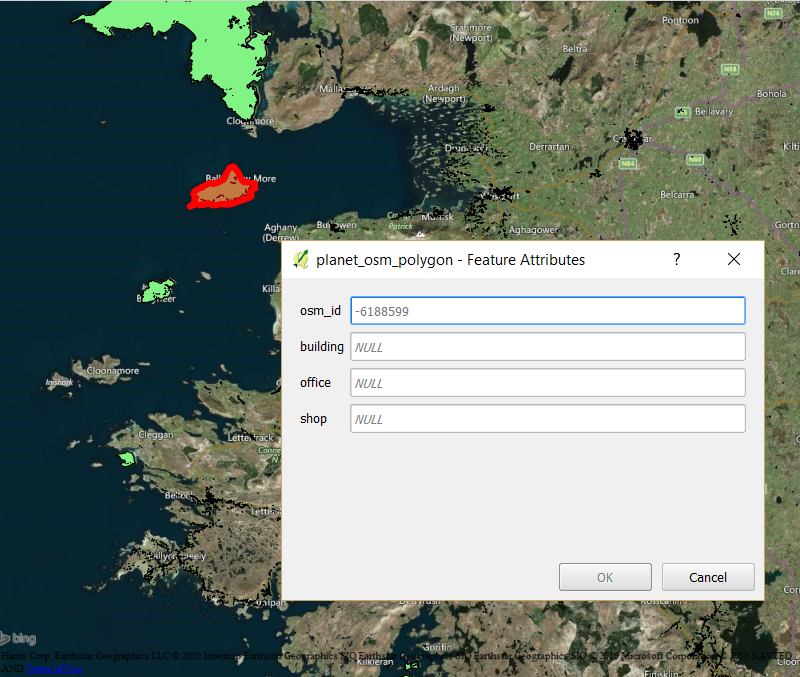 I am reading this documentation: http://wiki.openstreetmap.org/wiki/Osm2pgsql/schema

This table contains all polygons (closed ways) which were imported. For polygons which are members in one or more relations, multiple rows will be created: one with the polygon's own ID and tags, and one more for each relation membership. These additional rows contain the tags of the relation and the negative ID of the relation in the osm_id column (since a single relation may contain multiple polygons, negative IDs are not necessarily unique).

I've created a style file which allows me to extract all the building polygons, but it seems some areas, which have the tag 'building=NULL' are not actually buildings, but describing an island in the water, or the actual country itself (which also comes with the 'building=NULL' tag).

Would it be safe to simply discard all the polygons which have a negative ID?

At the moment, I collected all the OSM IDs of these "islands" and other elements tagged wrong, and I'm deleting them via PGSQL:

Is there a best practice in relation to this, should I go on the map and feed these fixes in, or is there a way to avoid this type of query where I want to look at building polygons without getting these "odd" entities?

The planet_osm_* tables are not normalized. You must create a table (or view) to store the data wich makes sense to your application.

This will make easy to create some semantics to the data and to filter what you realy want (I prefer to create a table because indexes makes it faster).

I think all building=null is because that tuple is not concerning to buildings, but to some other information that fits into your style file selection and you've imported buildings too. So, the osm2pgsql created the building column because of the building tag in *.style file, but some other tag combination commands the importing of those lines with no building information. You must analyse the data lines to know what tag is causing this import.

You may look at the combination info page ( example: http://taginfo.openstreetmap.org/keys/amenity#combinations ) to know what tags is likely to combine with others to create a more normalized table ( or just follow my example and create a separated table by yourself ).

This is not a NULL tag, but simply an empty field, and the way QGIS displays it.

Negative osm_id have all polygons that are build from multipolygon relations, while polygons build from simple closed ways have their positive way osm_id.

See http://www.openstreetmap.org/relation/6188599 for the island you took as example. It has no building tag, neither have the members.

Not the answer you're looking for? Browse other questions tagged openstreetmap osm2pgsql or ask your own question.

1
How to get a set of all buildings of an OpenStreetMap section in form of single points / Multiple polygons as one point
2
How to style ways with CartoCSS depending on a relation property (OSM)
2
Using relation tags to nodes in OpenStreetMap?
3
How do I get the building housenumber from OSM data?
2
osm2pgsql: Extracting full buildings polygons + addresses text from OSM
0
All OSM points/polygons with address string
1
How to import OSM ways, without tags, into PostgreSQL using osm2pgsql?
2
Importing OpenStreetMap polygons to QGis with relation attributes
4
Can I depend on the country/city IDs of OSM?
1
Column "tags" is missing in PostgreSQL table created with osm2pgsql