I am running queries against a polygon layer using the ArcGIS SOAP Web Service. A user selects a point within that layer and the resulting feature set contains PolygonN objects.

Occasionally, the polygons that come back contain negative space. These are also known as donut or island polygons. Here is an example: 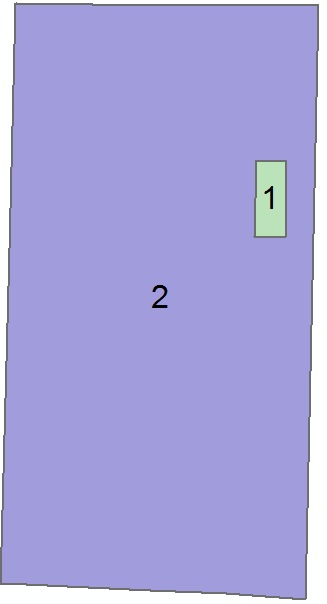 In this case, I would only want the geometry contained in the purple area, not the green area.

When the user selects a point within the purple area, the resulting PolygonN object contains 2 rings, representing the outer and inner areas, as it should.

The inner ring, as far as I can tell, has no way to indicate that it is actually negative space. So the resulting polygon looks like it has 2 solid shapes, when in fact it is only one shape with a hole in the center.

Does anyone know how I can determine that a polygon's ring is actually negative space?

Not the answer you're looking for? Browse other questions tagged arcgis-server polygon soap donut-polygons or ask your own question.

10
Filling in Donut Polygons using ArcGIS for Desktop?
5
How to identify feature vertices that are part of a donut hole in ArcGIS 10?
2
How to join attributes of donut polygon to hole polygon in ArcGIS?
4
Creating donut holes without losing existing polygons using ArcGIS for Desktop?
1
How to create a polygon with a circular hole in openlayers 3?
2
Draw polygons from self-intersecting lines: Looking for a workaround for inner boundaries / holes
4
Problems updating geometry of multipart and donut polygons with Arcpy
4
Make holes in a polygon from existing smaller polygons