I'm trying to build a GUI that allows replacement / update of the PostGIS database that holds my OSM extract (which I use for rendering, typical mapnik / tile server arrangement).

However I don't know how to get that from the database.

From http://wiki.openstreetmap.org/wiki/PBF_Format I see there is a osmosis_replication_timestamp field in the header, but I don't see how to retrieve that with just osm2pgsql.

At this stage, I'm thinking about either to "shell out" to something like osmosis, or trying to parse the HeaderBlock myself. I'd then have to store that (perhaps in the database, perhaps in my local state, perhaps as a file like the mod_tile approach). Both options suffer from lack of integration with the import process (e.g. if someone does a command line import using osm2pgsql, my separate state won't reflect that import), so I end up having to track import date / timestamp pairs. Both osmosis and a parser are pretty heavy for one timestamp...

Is there a way to get the replication timestamp directly from the results of an osm2pgsql import?

Using OSMConvert, the wiki shows how you can extract/display the timestamp from the file header:

This could be included in your update process and piped into the database for your GUI to read later.

Using OSM2PGL, the wiki describes how the timestamp is retrieved with each object by editing the default.style file (or create a new one). A new column is created in the database for the extract. Simply unremark the timestamp at line 78 and use the following command without --hstore and include the style file reference:

You don't have to get that from the database. When you are downloading the PBF you can retrieve the timestamp at that time.

If you are using wget then you can use the -S option (server response) which downloads and produces this result containing the last modified date:

or access the file system in the programming language of your GUI to get the last modified date: 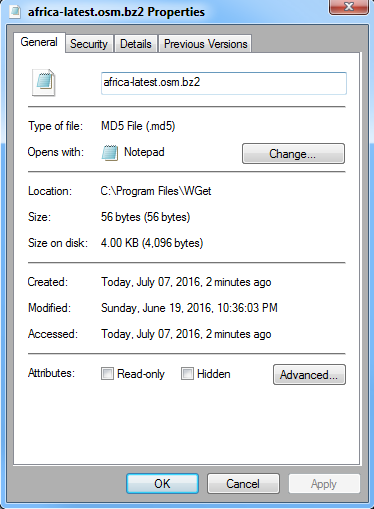