How can i add style to Mapinfo table?

I used Mapbasic to create tables. I create only table's structure without any objects inside.
How i want make styles for tables. I tried something like:

But styles still defaults.
After i tried to add point to table and used MakeSymbol() to add symbol style, and its worked.

So MapInfo idialogy means that i gonna have a objects in table to create styles or i just do something wrong?

Basically yes, the code you have used would update all the objects that are already in the table with a new pen and brush style. If there are no existing objects in the table then there would be no records to change. It sounds like you maybe want to change the current pen and brush styles so that any new objects you draw use that new style? If so, you can do that using the Set Style statement.

You can also query what the current style settings are using the CurrentBrush(), CurrentPen(), etc. functions alongside the StyleAttr() function which pulls out individual style attributes (e.g. Pattern, Forecolor, Backcolor, etc...). Take a look in the reference guide for examples on all of the above, it's really well documented.

Also, just to clarify, you can't add a style to a table in MapInfo. Individual objects have a style, but a table does not. There is however a way to override the object styles for a map layer using the style override functionality. In MapBasic that comes under the broad umbrella of the Set Map statement.

You can via the Layer properties dialog set the styles for new objects inserted with the standard drawing tools in MapInfo Pro. 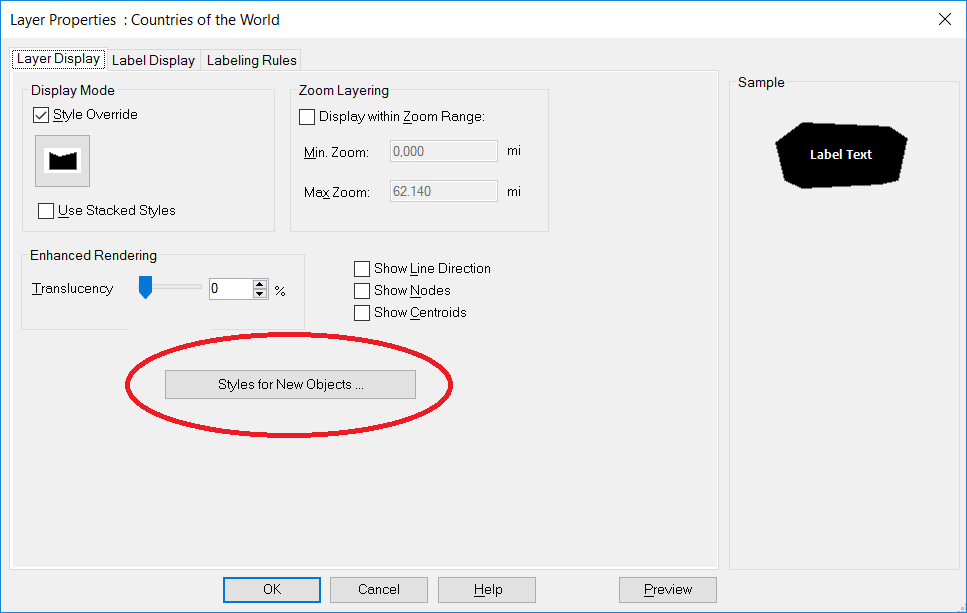 Notice that the layer must be editable for this button to show in the Layer Properties dialog.

Not the answer you're looking for? Browse other questions tagged mapinfo mapbasic or ask your own question.

2
How to add custom Icon to buttons on buttonpads in mapinfo?
0
How to find which table has layer in mapinfo?
1
How to handle line data in Mapinfo?
0
How does MapInfo handle button identifiers?
3
How can I change object image in MapInfo using MapBasic?
2
Creating site cells sectors in MapBasic for over 1000 records?
1
MapInfo / Mapbasic: simple compile of table from six source tables
4
How can I change region style in MapBasic
1
Google Earth Pro does not completely open TAB files created in MapInfo 15+
2
How can I Create Line Feature using two separate point features in MapInfo