I have looked throughout this site to find a method to calculate the overlap area of multiple polygons within a single shapefile but haven't found one that works for my case. I've tried the intersect tool but that doesn't seem to accomplish my task as it requires multiple input shapefiles. 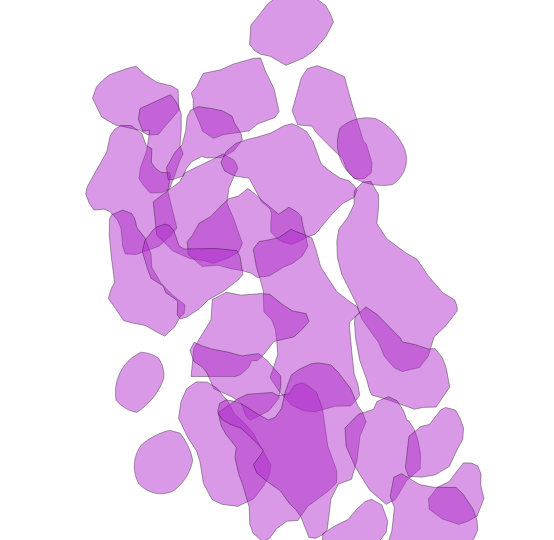 Above I have included a image of my shapefile and the polygons. Each polygon represents an animal's territory and has several attributes assigned to it (age, sex, etc). In this example, there are some polygons (animal territories) that don't overlap and others that overlap multiple polygons. What I would like to do is to calculate the total overlap area (dark purple) within the shapefile. Eventually I would like to know the identities of all the animals that overlap each other. In the entire shapefile I have 300+ territories and multiple years of data so I need an approach that would be somewhat efficient.

If you were using ArcGIS here is how I would do it. Hopefully this might spur a QGIS user to come up with a duplicate methodology. (Or maybe it is much easier in QGIS?)

1) Run the Union tool on the polygon feature class. 2) Add the following fields x,y, and count. x and y should be double and count integer. 3) Right click and calculate geometry to get the x and y coordinates. 4) Calculate count at 1 for all rows. 5) Run the dissolve tool on the x and y fields and also allow for the SUM of the count in the statistics field.