Points not displaying in feature class in file geodatabase

I was working with shape files when I recently decided to put all my shape files into a single file geodatabase. I just tried to add some more points to the feature class by inputting the coordinates in the columns I have created for the x y coordinates. However, the point is not displaying. I am thinking that the feature class is just not recognizing the xy columns as xy attributes since this is the first time I have tried to add points to the table. Originally to add the points to the map I just imported an excel sheet with the xyz and attribute data as a table then exported the table as a shapefile.

Is there a way to specify columns as coordinates so when adding points in the attribute table they will display without having to construct a point?

I do not know of a way to do so directly. If you only a few points, enter to editor, start editing, click "Create Features", select point, then right click on the map and select "Absolute XY". You can then input the coordinates, hit enter, and it will create the point location. You can then enter the table and input other attributes.

If you have a lot points to add, I'd recommmend bringing it in as table, display X,Y data, do a join to the existing point file, and then export to a new, replacement file.

I had thought there was an ArcToolbox tool that creates new features from XY, but can't find it.

I believe I have seen some arcpy that will take coordinates from XY Columns and create features from them. This solution may meet your requirements the best, however may require a bit of arcpy understanding to get it to work. I'll have a hunt and see if I can find a link to that solution.

I couldn't find the arcpy solution, but it would probably look something like this:

Attached to a ArcToolbox script tool with three parameters: 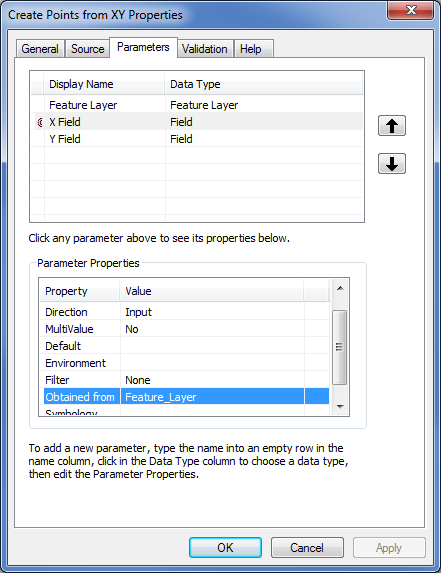 This will take X and Y values from a feature class table and create the points inside the same feature class if they don't already exist.

Not the answer you're looking for? Browse other questions tagged arcgis-desktop arcgis-10.0 point file-geodatabase or ask your own question.