Path to proxy.cgi for GeoServer is not accessible in browser

There have been several questions very similar to this asked already (including ones not involving GeoServer), but their solutions have not solved my problem. I am trying to use GetFeatureInfo on my GeoServer WMS layers, which are hosted on a different domain than the website on which they will be used, and have since learned that I need a proxy to accomplish this.

I have followed the instructions on how to set this up in Tomcat 6 (except for renaming .jar file as it's unnecessary in v6), added www.greengeography.org and the IP of my local network to the proxy.cgi file, then changed the top line to #!/usr/bin python as that's where it's at in Amazon's EC2 Linux (and also tried a slash instead of space as I've seen both ways).

I am confused on URL mapping, servlet mapping, and where to create a CGI directory, so I tried it in just about every location within the /tomcat6/webapps, including the main GeoServer directory. The only place I am able to access the CGI file in a browser is at the root. Why can I not make this happen in the GeoServer directory, which is where I think it needs to be? I did not see instructions about changing the URL mapping, so I'm not positive it's the problem.

As suggested in several other questions posted on this site, I attempted to install the GeoServer Proxy Extension instead of configuring this stuff manually, but every time I tried to access it from the GS admin page, I got Java errors (no matter which version of the extension I tried), so I gave up and went back to manual.

If it helps, here is some of my JavaScript, and I have tried just about every URL variation I could think of:

I have also been getting these errors in my GeoServer logs:

I also get ones when a file cannot be found. This one happens to be an html file since it was just a test to see if I could figure out the paths, but the rest of them are for proxy.cgi:

Last but not least, I also tried more paths to point to the .cgi file, as suggested here. But no matter what, I get this error in Chrome Developer:

If you feel I should've been able to solve this given that there have been so many similar questions asked already, that's fine, but please don't down vote it, because I did do my research.

You should be pointing OpenLayers to a local proxy. Not the proxy on GeoServer. 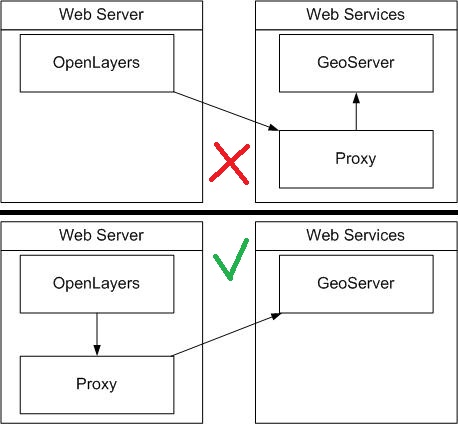 Not the answer you're looking for? Browse other questions tagged geoserver openlayers-2 tomcat or ask your own question.

1
Key authentication module Geoserver - authkey
0
Not Found proxy.cgi file
2
GeoExt WMS GetFeatureInfo in proxy server. Problem - popup is empty in chrome and not responding in firefox?
2
How to configure Proxy.cgi file for Geoserver On Tomcat?
1
Configuring proxy.cgi in Windows using Apache and GeoServer?
6
Access-Control-Allow-Origin Openlayers WFS
0
GeoServer - page not found http error 404
2
How to pass tile size of to 512 using OpenLayer 3 and GeoServer 2.14