I am attempting to create a simple distribution map.

I have created a vector layer by importing a table in .tsv file format consisting of a list of named points with latitude & longitude in decimal degrees plus heights. CRS is EPSG:27700 (OSGB 1936 British National Grid), the same as the other layers in the project. I can see the points displayed in the correct positions relative to one another by highlighting and zooming to the layer, but I cannot see any of the other layers. The attributes table has data in it which corresponds to the ’tsv spreadsheet from which it was derived.

I have also saved the file as a .shp file; again, I can zoom to that layer and see the points, and the attribute table looks OK, but I still can’t see any of the other layers, except for the .tsv layer from which the new .shp file was derived. To return to the other layers I have to select one of them and click the zoom to layer tool. But then I can’t see the new layer.

I’ve had several attempts at importing, including importing using CRS ESPG:3857 (WGS 84 / Pseudo Mercator). Result is the same. I have CRS transformation ’on the fly’ enabled in Project Properties.

I would be grateful for advice as to how to solve this problem.

Try using the Reproject layer tool from the Toolbox (enabled from Processing--> Toolbox): 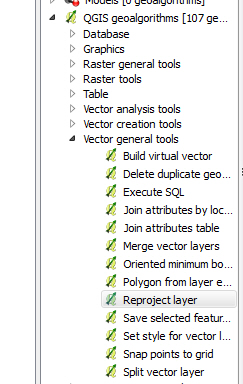 I was able to reproject a .shp file from UTM 31N to WGS 84 without any problem using it.

Not the answer you're looking for? Browse other questions tagged qgis layers or ask your own question.

2
How to align TIF and GPX layers in QGIS?
1
How do I gather X and Y co-ordinate data from a vector grid overlay in QGIS 1.8.0?
3
CRS transform from EPSG 4326 (WGS 84) ? to EPSG 27700 (OSGB 1936 / British National Grid)
4
QGIS Coordinate Reference System Problem
5
Layer disappears from map after CRS changed in QGIS?
1
Altering layer's CRS to correct Layer Misalignment in QGIS
1
Cannot get layers to "line up" in QGIS
1
Qfield layers are not where they should be. CRS problem?
1
QGIS not displaying WFS layer