How to sync/update an out-of-sync replica?

We have ArcSDE replicas (both one-way and two-way) of our databases between a number of different servers/locations, and have found that some of the feature classes are out-of-sync even though the replicas have completed successfully. As a result there are more features in one FC than in its replica, and potentially also attribute values that are also different.

You can see in this screenshot there are 39 more records in one than in the other: 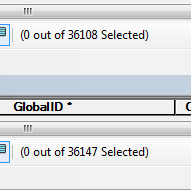 I have tried to manually run the sync (no-change) and also attempted to copy the missing features manually, which resulted in the new copies being replicated (and duplicated) so I had to remove them again.

How can I get my two feature classes back in sync without messing about with features as described above, and without having to recreate the child replica? Is this even possible?

Try making a minor edit each of the 39 features. This should update their StateID value in the A table to a state that hasn't been synced with the other replica. When you next sync they should be picked up as an add and synced to the other replica

Not the answer you're looking for? Browse other questions tagged arcgis-10.3 enterprise-geodatabase replication or ask your own question.