I'm trying to get the position of a coordinate on this map (source Wikipedia): 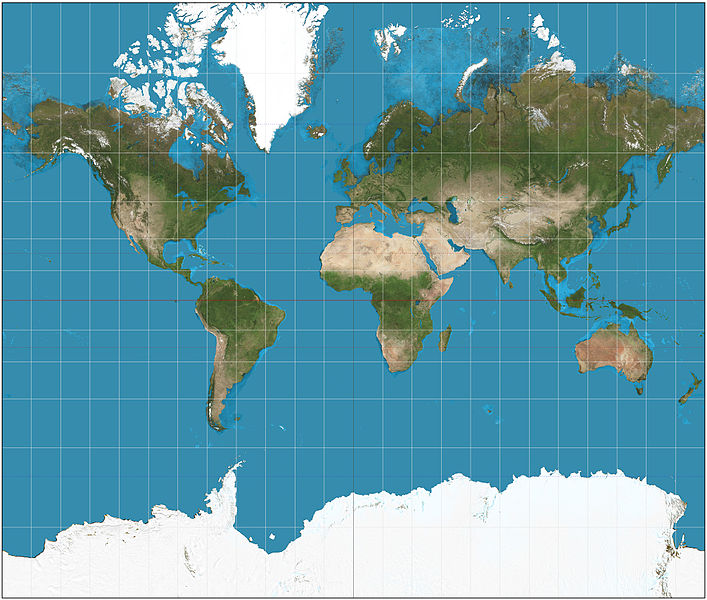 If I'm correct than the formula for the position of the latitude would be:

right? I tried filling in a latitude of 51° like this:

And if you go to 91 px above the equator then you're somewhere in Spain, which is too low. I was looking for the location of Belgium instead.

The formula and its application are basically correct: the length of the Equator is 2 * pi * R and equating that with 707 pixels tells us the scale of the map at the Equator. However, any formula involving trigonometric functions of angles that involves pi expects the angles to be given in radians. Therefore, the Mercator position of latitude 51 degrees must be computed as

pixels above the Equator.

If degrees are treated as if they were radians, then pi/4 + 51/2 radians is the same as 42.0848 degrees (plus four whole circles--8*360--which makes no difference), which indeed places the location in Spain rather than Belgium. In this case it seems like a relatively small error of just 117 - 91 = 26 pixels has occurred, which can be misleading, because at other latitudes the result would be incredibly far off or undefined. For instance, using 52 instead of 51 in the formula gives a negative tangent whose logarithm is undefined. Increasing to 54.977871437821385 places you 3786 pixels below the Equator!

In case anyone is interested this equation was reworked and solved for latitude on the Mathematics subgroup.

Input a map width and pixel position on the Y axis and it will return the latitude of that pixel in degrees.

Mercator projection - Use existing equation to solve for degrees

5
Mercator: scale factor is changed along the meridians as a function of latitude?
3
Mercator projection: formula for latitude based on pixels?

0
Distort image to Mercator Projection view
2
Populate planet with data
13
Great-circle lines in Equirectangular projection
3
Mercator projection: formula for latitude based on pixels?
3
Formula for charting a course around the globe, given a location and degree heading?
2
Web Mercator to 3d globe projection problems
4
Showing heading on a rectangular map projection
2
Why do imported excel long/lat points not align with basemap?