I have three separate feature datasets of 125 polygons that contain plant respiration, incident sunlight, and soil moisture data collected on three different dates. The polygons are perfectly coregistered/georeferenced; they are simply separate copies of the same dataset. The data should have been entered in one instance of the dataset, with one record per date, but this is what I have to work with.

I want to overlay these datasets and display the mean of the data from the three dates in one record? What tools can be used for this? I have thought of using Merge and then Spatial Join, but it looks to be very time-consuming.

If your polygon dataset is identical except for the measurements like you stated, you can use one of your files as a main layer and Join all other files to the main one. Once you joined all your files, export the data to save it permenantly. After that you need to Add a field on your attribute table and simply calculate it as "A+B+C" / 3 to have the averages.

Necessary steps for join can be found here: http://help.arcgis.com/EN/arcgisdesktop/10.0/help/index.html#/Joining_attributes_in_one_table_to_another/005s0000002q000000/

Spatial join offers a simple solution. You will need to set the merge rule for your respiration, sunlight, and moisture attributes.

Here is a screenshot of the merge rule menu. Select mean. If you need more info please let me know. 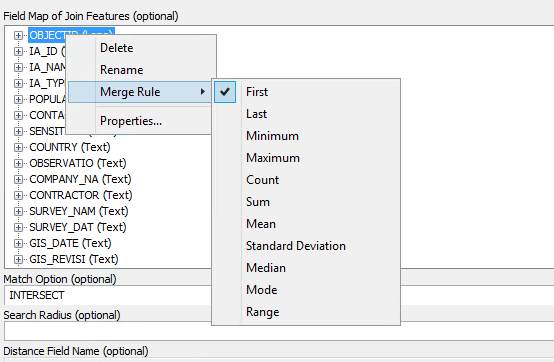 Not the answer you're looking for? Browse other questions tagged arcgis-desktop polygon merge spatial-join overlay or ask your own question.

2
Overlay analysis of topographic data
2
Spatial join based on field
2
Selecting numbers within the slash (/) using ArcMap Field Calculator?
2
Correlation between raster values and vector point values
2
Can I use areal mean pixel value in raster for input to Extract Values to Point tool