What are standard scales, or zoom levels, for map applications?

I am working on an ArcEngine program that is restricted to a set of scales. It currently has:

I don't think there's anything wrong with my scales, but I thought it would be interesting to know if there are any "standard" sets of scales used in web mapping or any other mapping applications.

Knowing which map scales match the zoom levels is important because sometimes caching a map takes a long time. If there’s any error in symbology or labeling settings for a certain zoom level, that map scale will need to be re-cached, which could take a lot of time. By browsing into the folders where the cached image tiles are stored, you can preview the tiles and verify that they look good. If they don’t, cancel the caching process, fix the map document, and re-start the caching process.

the above statement has taken from How can you tell what map scales are shown for online maps?, you can get more info here. and the following scales are from arcgis which i have been using for a long time that I have not had any difficulties so far...

if you want to mashup your maps with Google Map or sth else, you should use this map ranges: 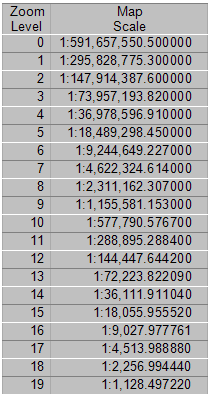 i hope it helps you

Web mercator and a specific set of scales have been adopted by all major mapping providers. Fo r more information on the choice behind using web mercator, see Why has Web Mercator (auxiliary sphere) become the web map standard?

The scales are listed under tile info/levels of detail section.

As Derek mentioned, the Google Maps scale are the de-facto standard for web mapping. But there definitely are some situations, in which you can't use those scales and projection.

Firstly, you should use those scales and coordinate system that matches with other online Web maps and services. In our case, we had to work with services which are in a certain projection that has been chosen as a National Standard. This is an LCC projection, and hence we have had to use a different coordinate system and scales.

Secondly, according to our national map policy, there are certain features that we cannot show beyond a certain scale. Hence we had to chose a scale level which met our statutory requirement.

So to conclude, the only standards that you should be concerned about, are those that you will have to interact with.

Surveyors (at least in our country) often use these scales...

...maybe you want to add them to your list.

I think you need to be careful when dealing with "scale" in GIS. Many people don't understand that the scale of a map relates to the scale of its capture and not the scale of it display. My advice is that the scales you choose should be linked to the metadata of the map you're displaying. I used to make the point to my students that no matter how many times you enlarge a tourist map of a country, local streets do not appear!

Not the answer you're looking for? Browse other questions tagged arcgis-engine scale or ask your own question.

109
What ratio scales do Google Maps zoom levels correspond to?
3
Mapserver, TMS, Scales zoom levels and how to deal with all of it
3
What is the default unit for QGIS scales and how do I set it to Km?
3
Why are map scales not used instead of Zoom-levels in web mapping clients such as OSM or Google Maps?
1
WMS scale denominators and zoom levels: why are these tables different?
2
Limit Zoom Levels in ArcGIS Online WebMap
0
Min and max zoom levels/scales for a QGIS project