How to create weighted sum based on variety of features, rather than number of a single feature? [closed]

I am interested in creating a weighted sum analysis of three different feature types in my geodatabase. These features are services in the community. Two of the features have much greater prevalence than the third feature. I would like to create an analysis that determines the best proximate location to all three feature layers rather than a straight total that could over-value areas of high instances of a single layer. 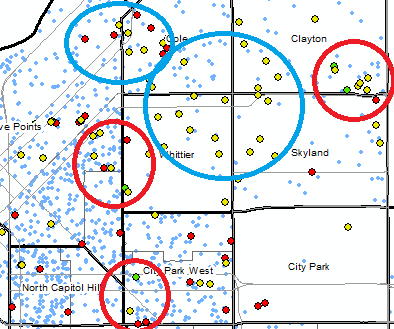 Obviously Weighted Sum on its own would be insufficient because even if I gave each feature a value of 33%, for example, if the yellow feature had a value of 3, but green and red were each 0, it would be the same value as a location where green, yellow, and red were each 1. Is there a way to have an exponentially lower increasing value the more of one feature exists (e.g., 1=1, 2=1.5, 3=1.75, 4=1.87, etc)?

What tool or expression for Weighted Sum could best accomplish this? I have access to both ArcGIS and qGIS.

Browse other questions tagged arcgis-desktop or ask your own question.