Creating buffers of a specific size and shape

I was recently asked to create a very odd "buffer" around several line features. I'm not sure if this is innately possible with an ArcGIS Advanced license or not and therefore am willing to explore other solutions such as QGIS. I am proficient in ArcPy, so please include any ArcGIS scripting solutions as well.

I have been given a set of lines that have a field called "Acreage". The ultimate goal would be to generate polygons around each line that have the area of the "Acreage" field. So, when considering the available data... I have the length of each line and the area that each final polygon should be. This alone doesn't seem like it should be to difficult to come up with a formula to calculate the buffer distance, especially if we were to assume each line is straight (though they are not straight, this might be the best I could do). However, to make matters even more complicated those who asked for this would like to see the final result as "bent" rectangles. The image below shows a mock-up of what they would like to see. 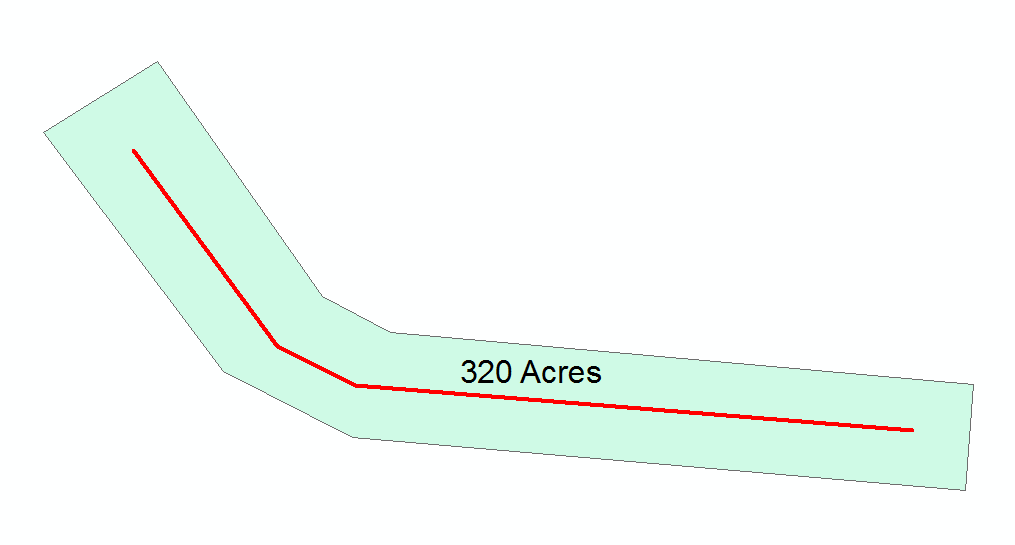 In the Image the red line is the starting data and the green "buffer" is what needs to be generated from each line.

The key elements are that the "buffer" needs to have the designated area(one of the line attributes) and also needs to have 90 degree corners.

If getting the corners is much more difficult or not possible. I would also be happy with a solution that just creates a "normal" rounded buffer that contains the right area. 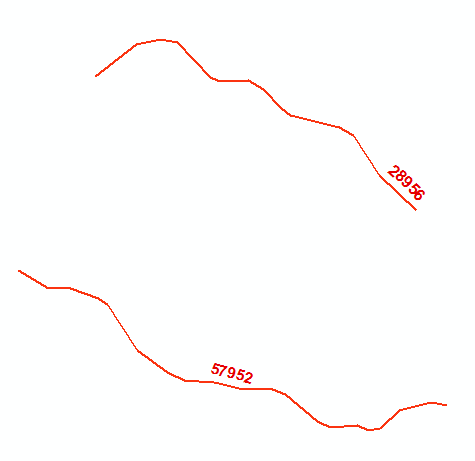 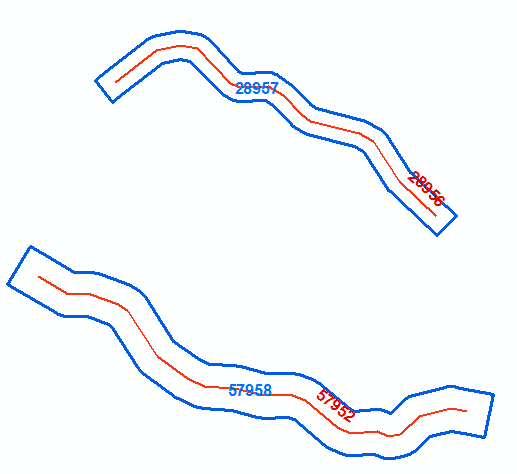 It is good you are proficient with arcpy, you'll figure out parameters

Your approach gives the impression of working simply because your lines are not that bendy and most importantly buffers are skinny. Try with the shape below and buffering distance comparable to line length and you’ll notice significant increase in mismatch with target area.

The class of problems you are dealing with has no analytical solution. However an accurate estimate can be found numerically through iterations, tries and errors but much quicker by using one of well known root-finding techniques. I used the method of bisection that is not very efficient. The golden section or others might converge faster. Nevertheless in took only 18 iterations to find buffer distance, accurate to 0.01 m for 12 km long shape with 1000 vertices shown above. As for it’s accuracy, gauge by yourself, I am struggling to express it using percents.

It took 5 seconds only on my out of date machine at home. Unfortunately buffer() method of arcpy geometry does not support flat ends ( this is why I had to use tools working in_memory), otherwise it could be done in no time.

I was looking into this exact same issue last night and I am exploring using the: toolboxes\system toolboxes\analysis tools.tbx\proximity\multiple ring buffer To try and generate multiple buffers and hopefully giving me a start point for a buffer that is flat on the end. I know its a long shot but it may get me in the ball park allowing just some tweaks to get the final product. This is the Script I found on Arc:

Found at the link below:

You could try one of those solutions (in QGIS):

Buffer with a surface

v.buffer creates a buffer around features of given type, which have a category in the given layer. The tolerance controls the number of vector segments being generated (the smaller the value, the more vector segments are generated). Straight corners with caps are created by -s flag (red color on the figure below), while -c flag doesn't make caps at the ends of polylines (green color on the figure below):

After many different approaches. I have found a series of processes that seem to work rather well to generate the buffers I need. The solution I came up with uses ArcGIS, heavily relying on ArcPy and some basic pre-calculus level algebra.

For starters I assume that any given line receiving a buffer is a straight line. This is not always the case with the data in question but overall my margin of error was only .35% at it's highest. the more a line curves however, the more this margin of error will go up as a buffer starts "folding back" onto itself. So... Considering the following image:

We know D (the length of the line feature) and we also know the total area of the buffer (again we assume straight lines).

We can then turn this into a quadratic formula to solve for C:

Using the quadratic formula we can solve for C however, as with all quadratic functions we get two answers. In this case we will always have a negative answer(we can ignore this one) and a positive answer(this is C).

After acquiring C buffers can be generated for each line that with the necessary dimensions. However, a standard buffer is rounded on each end and if we were to change the buffer ends parameter to "flat", we end up with a buffer that contains less area than desired because the buffer ends at the line beginning/end. To account for this I was able to find a script on SE that extends lines by an amount. The author of the script knows their python. This is one of the more pythonic spatial scripts I've ever seen. I was able to adapt it to take a field as the extension distance as apposed to a constant value for all features. This was really the only change I made to the line extending script. Again, I did not author this one, credit goes to @Paul

I ran this script on my line data and then flipped each line and ran it again. This created a line that ran the extent of a normal buffer. I could then run the buffer tool again with "flat ends" selected. The final buffers are 99.99% accurate when run on straight lines. They do vary slightly with many curves, but even then the highest margin of error seen was .35%

I plan on combining these two scripts together and adding in the line flipping tools, etc. in order to create one seamless tool to run for the scenario.

Here is an example of the results. 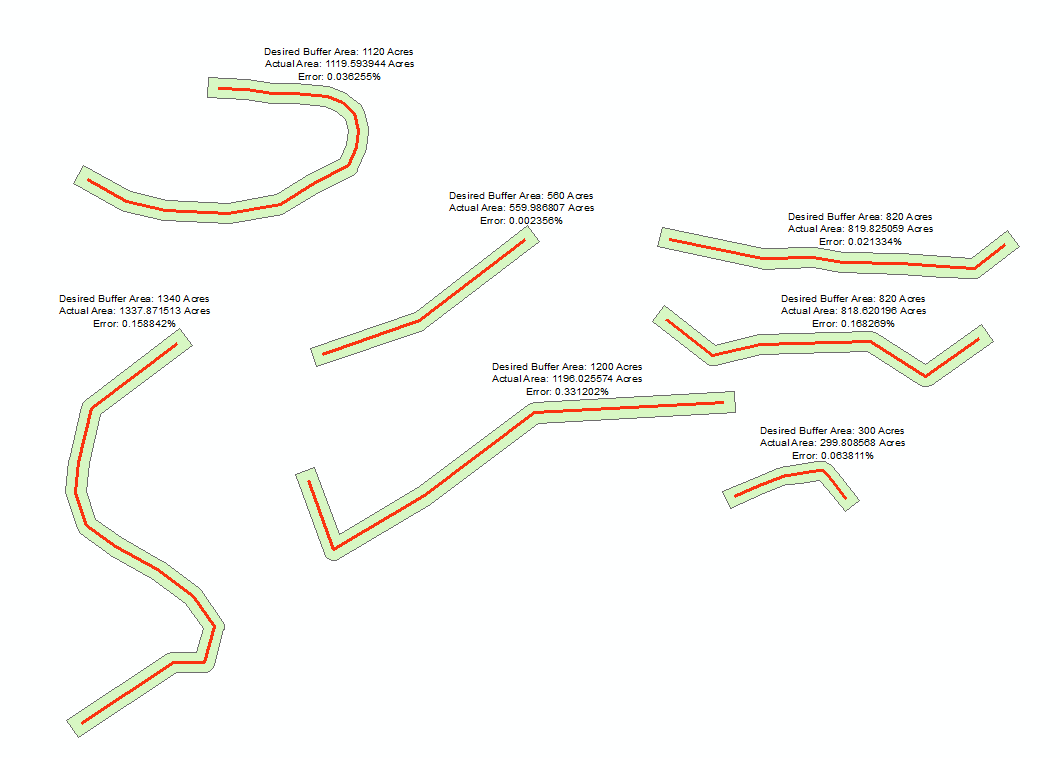 Not the answer you're looking for? Browse other questions tagged qgis arcgis-desktop buffer or ask your own question.

10
Extending line by specified distance in ArcGIS for Desktop?
6
Increase each polygon area to the same area

3
Creating buffers that will not overlap in QGIS
3
create polygons and fishnets of specific size and orientation and buffers
1
Calculating length and area of habitat polygons within overlapping buffers in ArcGIS
4
Multiple buffers to both sides of a line using ArcGIS
3
Creating buffers with values, and finding areas with high value overlap of these buffers
3
Removing Intersection of Buffers in Same Layers
1
Proportion of polygon classes in each multi-ring buffers
1
Extracting the Number of Pixels within Buffers around Various Points in Google Earth Engine?