I'm trying to use FeatureClassToFeatureClass_conversion() to convert tab files to shapefiles. When I run the code below, the error says

C:/temp1\Overlays\Character_Places\Historic_Misc_Heritage.TAB Failed to execute. Parameters are not valid. ERROR 000732: Input Features: Dataset C:/temp1\Overlays\Character_Places\Historic_Misc_Heritage.TAB does not exist or is not supported. Failed to execute (FeatureClassToFeatureClass).

It appears that you need to do something similar with the TABfile. My file looked like c:\mydata\mytabfile.tab\mytabfile point where you've got the name and geometry type after the tab filename. 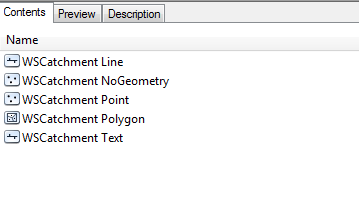 But when I include the actual geometry from inside the file, the tool accepts it and outputs it as expected

You may need to modify your script to something like this:

There doesn't appear to be a way to get arcpy to automatically read the contents of the TAB file (using something like arcpy.ListFeatureClasses() or similar), so you may need to know what each one is beforehand - perhaps storing them in a gdb table and reading that to get the names and geometry type to pass through to your arcpy.FeatureClassToFeatureClass_conversion() tool.

Not the answer you're looking for? Browse other questions tagged arcpy error-000732 tab data-interoperability or ask your own question.