Is it possible to store relative paths in an unmanaged raster catalog?

I see this feature request which leads me to believe it's not possible: 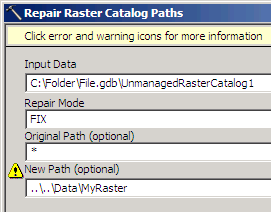 A workaround may be to use UNC path, by sharing the folder on the network: \MachineName\SharedFolder...

Not the answer you're looking for? Browse other questions tagged arcgis-desktop arcgis-10.0 raster-catalog file-path or ask your own question.