Getting layer name of selected features with ArcPy?

I'm working on Python add-in that changes geometry of an object (polygon orthogonalization). The tool itself works properly when I give it an input line of layer name (or just drag layer from table of contents to script window).

Now I need to deal with single selected feature from unknown layer. For example I have 10 layers in the current mxd, edit session started for 5 of them and I need the one which feature is selected from.

How to get a layer name of current selected feature?

UPD. So what i have now. When tool works from toolbox it have an input parameter layer which is further converted to path:

This works good when I execute this tool from toolbox for all the layer contents. This tool can also work with only selected features and I already tested it by replacing all the input with a strict line layer = "building" and adding this layer to TOC.

Now I'm trying to edit this tool to work as add-in with button.

What I need now is to know how to get a layer name when I simply select one polygone from some layer.

The pythonaddins module has a function to do just this, GetSelectedTOCLayerOrDataFrame(): 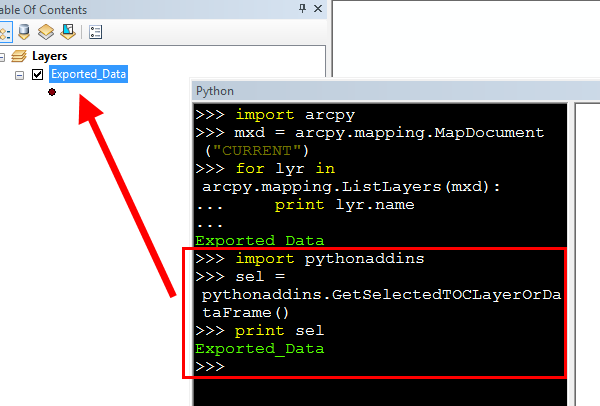 You may be able to modify this to suit your requirements. This loops through all layers in your MXD and checks if there's a selection. If it finds a layer with a single selected feature it will return the name of the layer.

The Layer method getSelectionSet() returns a list of OIDs of selected records in the specified layer. Getting the length (len()) of that list will tell you how many features are selected.

Regarding to my old Answer: You can extend it to get what you are looking for:

The logic is simple take the extend of layer and compare it with selected extend, if it has changes the layer has selection.

Im one million percent sure that this logic works on terminal and on scripts, maybe it doesn't work on your addin.

Answer work for Addin too. It can be applied from 10.2 onwards. But getSelectionSet also does the same from 10.3 onwards.

Not the answer you're looking for? Browse other questions tagged arcpy arcgis-10.2 python-addin or ask your own question.