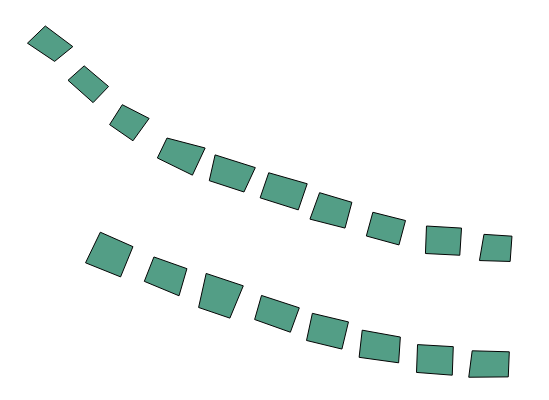 I have some buildings that were quickly digitized from an aerial image. As you can see most of the polygons are not rectangular.

How can I modify the polygons to make them more rectangular?

Is there some equation that can solve a rectangle from a group of points?

I do not want to re-digitize the polygons. The polygons are supposed to represent buildings. I am using Qgis.

I tried code from @Matte but resulted in 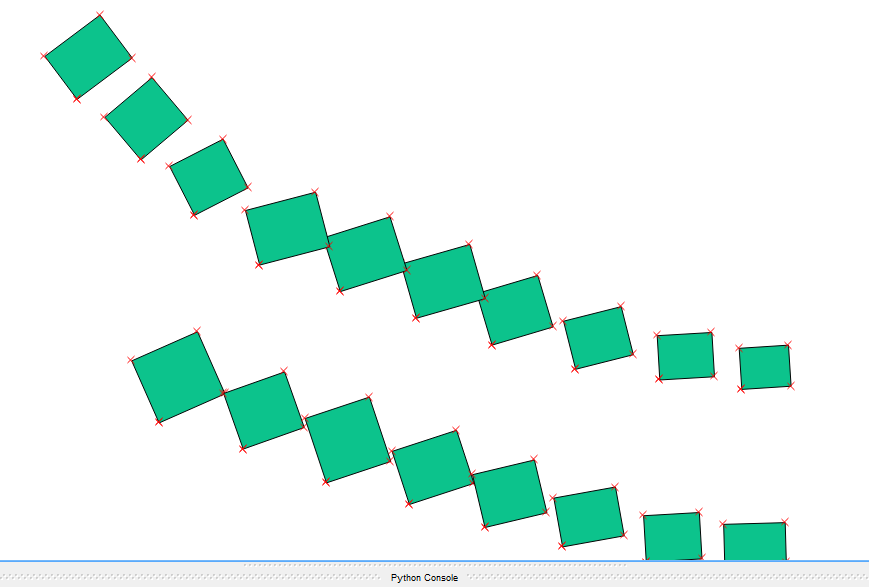 Next code uses analytical geometry to change each polygon quasi rectangular in rectangular and it could be used:

I tried it out with shapefile of next image: 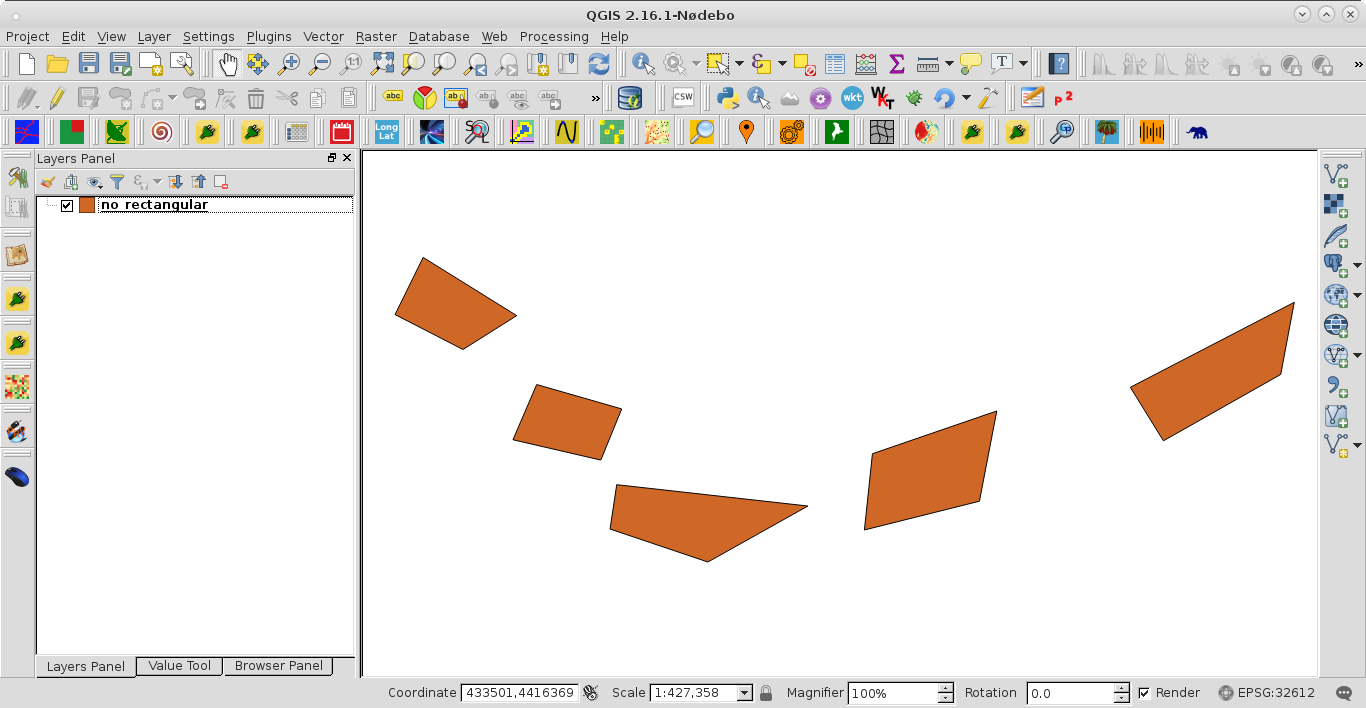 After running the code at the Python Console of QGIS I got: 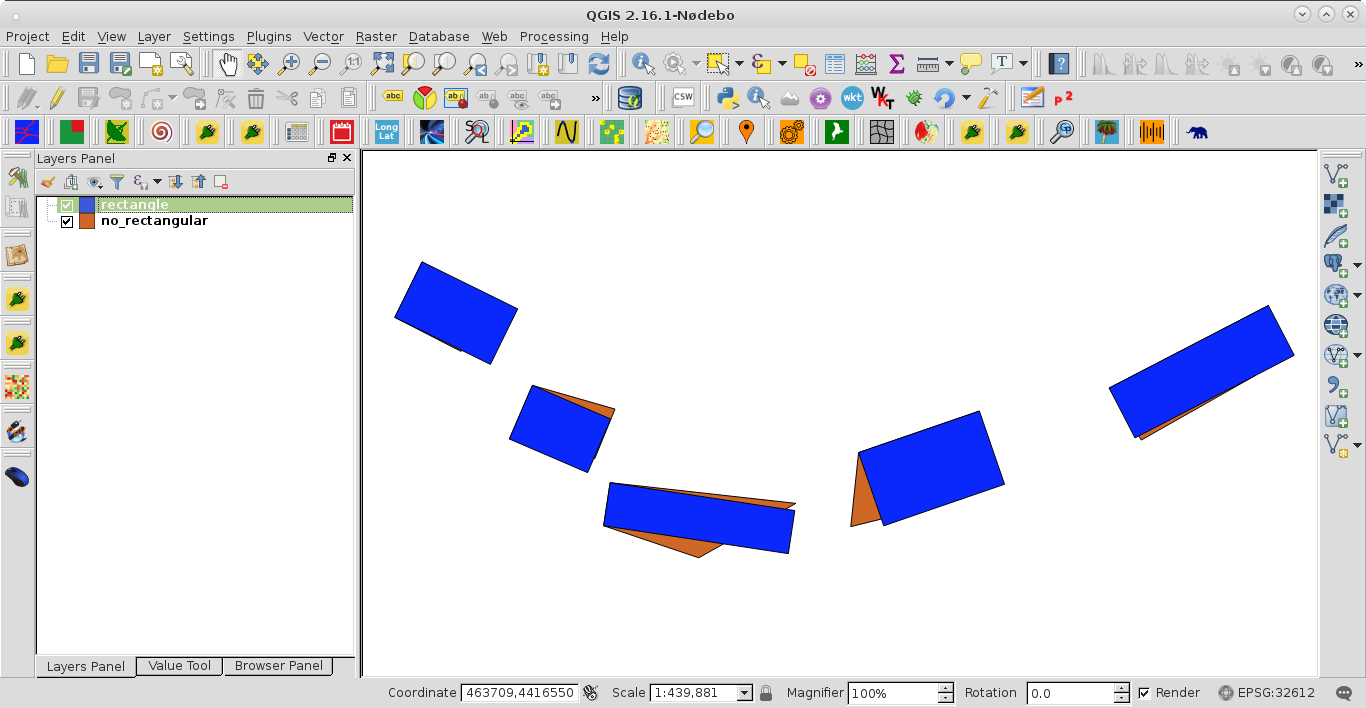 You can try to use the following approach that changes the geometry based on the bounding box and the angle of the first digitized edge. You can of course alter the angle with the one from the longest edge or something. Only works well when your polygons are near rectangular already (as it looks like).

Input in the console in Qgis and the layer needs to be selected and editable:

For each 4-vertex polygon:

Compute an estimate of the centre of the rectangle, C, as the mean of the 4 vertices.

Compute an estimate of the diagonal length of the rectangle, R, as the mean of the four distances from the estimated centre to each point times two.

Compute the rectangle aspect ratio by computing the average of the unsigned angles of a line from each point to the centre point and the rotation angle. So if the rectangle is square this is 45 degrees.

Compute all the four points from the knowledge of the centre, the diagonal length, the aspect ratio, and the rotation angle.

I think this is robust to any convex arrangement of four points - I don't know what it might do if given a concave polygon...

Any chance you can dump your sample data and I might try and code this up....

6
Showing only some layers in QGIS legend?
42
Generating equal sized polygons along line with PyQGIS?
1
Why does joining all layers in a group not work?
11
Generating consistently-dimensioned polygons in mm units?
1
How to assign raster values to lines with PyQGIS functionalities?
3
Loading WFS 2.0 layer using PyQGIS?
2
PyQGIS - get spatial/positional order of featurelist
2
Automating production of thousands of images using PyQGIS