I've become a big fan of a visualisation technique called grid maps. Here are some examples:

There is a tutorial on automating the creation of these using D3.js and force directed layouts but I'm not skilled in this area (plus I'd feel more comfortable handling a shapefile than I would SVG, even if it is grossly distorted in terms of geographical accuracy):

Are there any QGIS / R / Python techniques which could be used to convert a shapefile to a grid map based on evenly sized squares or hexagons (whilst retaining each feature's data)?

I realise that this would completely destroy/distort the geographic accuracy of the shapefile, my interest is being able to generate these for use as high level visualisations using ggplot in R.

Edit 1: With a single tag edit, iant opened my eyes to googling for 'cartogram' (d'oh) which has yielded this site's consideration on the issue: https://richardbrath.wordpress.com/2015/10/15/equal-area-cartograms-and-multivariate-labels/

Also, I thought I had duplicated another post but their question is a bit different as they want an equal number of a measure to fall within each feature: How to create contiguous area cartograms in QGIS or R?.

Edit 2: In response to stev-k's answer, here are the results from running the suggested script. Red points are centroids of the polygons (in grey) with the hexagons overlayed to show how some are empty and some are crowded. 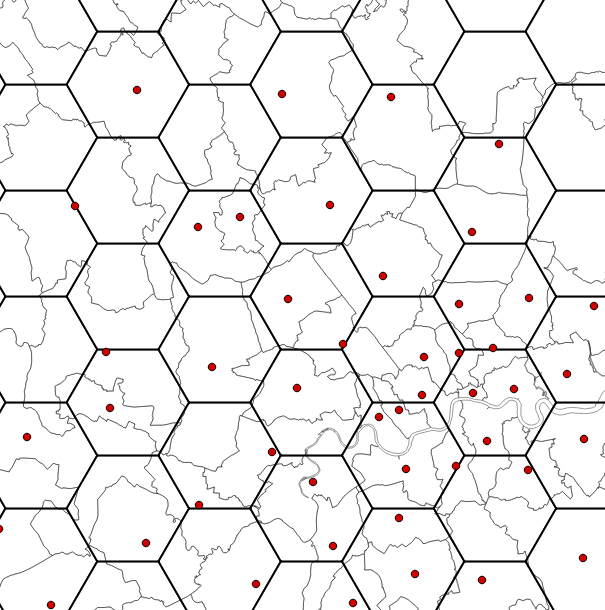 I suspect that your challenge is not with generating the grid but rather deciding how to assign the pre-existing geographies to particular hexagons in the grid (assuming n.polygons == n.hexagons). One approach might be to use the Hungarian Algorithm. Given the distances from the centroid of every pre-existing geography to the centroid of every hexagon in your grid (or some other distance) the Hungarian algorithm could calculate the solution that minimises the sum of displacements from the original locations to the new locations. For more information have a look at an early stage R package which does this here.

Of course, this approach does not guarantee that polygons will maintain the same neighbours but might go some way to helping. I am still trying to solve a graphical approach to this and have a question out here which addresses this.

That will create your hex grid. Then you need to spatial join your points (assuming they are points) onto your grid to enable them to be shown. There is no spatial distortion, just spatial aggregation - I wouldn't call that distortion - it's a standard technique in geographic visualisation and processing.

Retrospective answer to my question, an R package has been released which addresses this very issue: https://cran.r-project.org/web/packages/geogrid/index.html

Not the answer you're looking for? Browse other questions tagged qgis python shapefile r cartogram or ask your own question.

21
How to create contiguous area cartograms in QGIS or R?