Joining 17 million points to one dissolved polygon layer taking over 24 hours to run!

I am trying to count how many points, out of 17 million, fall inside a polygon (see image below) 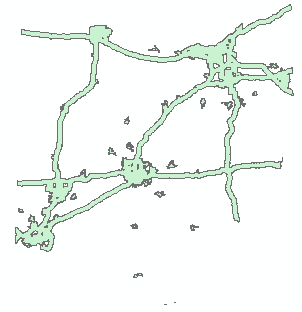 which I created from dissolving various buffers and features. The polygon layer is thus one dissolved feature. Both the points and the polygon are feature classes saved inside a file geodatabase. I am also using ArcGIS 10.3 on a 64 bit desktop.

To count the number of points I first added a column called 'Count'and populated all fields with 1. I then right clicked my polygon layer, clicked 'Join and Relate', and then 'Join'. I then chose the join option: 'Join data from another layer based on spatial location'. The parameters I entered are below: 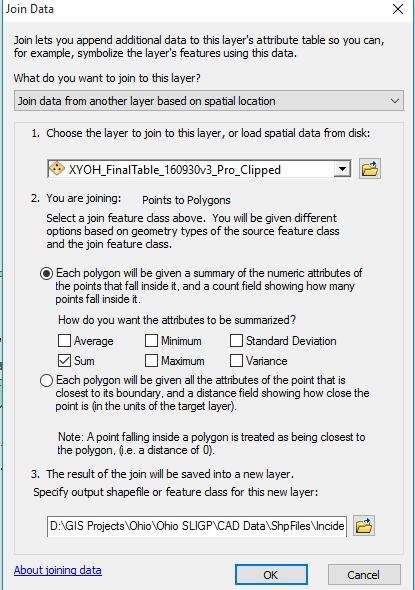 . As you can see, I am summing all fields. Thus, I will be able to sum the 'Count' column to determine how many point features lie inside the polygon feature as shown above.

I was able to successfully do a similar join with the 17 million points and a fishnet with a grid size of 1 mile by 1 mile covering the state of Ohio. That process only took me 2.5 hours yesterday.

Why is it taking so long to sum all points inside a dissolved polygon feature class? Is running such a process 3 times at the same time adding to the slow speed? Is there a way to speed up this process in ArcGIS 10.3?

I am the only GIS Analyst at my company and am at a loss in understanding why it is taking so long.

Your fastest and most accurate option is to partition the large polygon with a lattice into much smaller and less complex polygons that benefit from a spatial index and then do Select by Location on the points and use a summary or just open the point table view and look at the selected feature count to get the selected point count. This will give an accurate count and be much faster. You cannot do a Spatial Join using the partitioned polygons, since any points that touch more than one polygon boundary will be counted more than once when you sum the counts of all the polygons.

Not the answer you're looking for? Browse other questions tagged arcgis-desktop arcgis-10.3 performance spatial-join point-in-polygon or ask your own question.