ArcGIS - Selecting features depending on 2 attributes

Ok, I guess this should be not too hard, but I can't figure it out:

I have a layer "A" resulting from a layer "0" which was intersected with itself. So layer "A" contains all intersects.

The relevant columns in the table are: "Value" and "ShapeArea" I can see which features(polygons) in "A" are matching with each other as they have the same Shape_Area. The Intersecting parts have (sometimes) different values in the field "Value" However, what I need are not both intersecting features (polygons) but only the one with the higher value.

And also I not only have intersections containing 2 polygons but sometimes 3 or more.

As there are 2000 features in the table I can't select them manual... 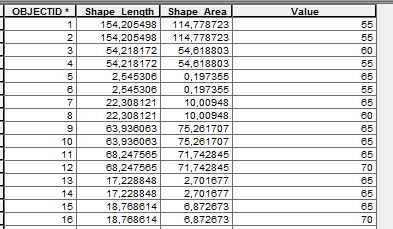 So in the example in the picture: Objectid 1 and 2 --> I would only need one of them (which one is not relevant as they have th same value) Objectid 3 and 4 --> I need Objectid 3 as the value is higher

First use your layer as both target and join features in spatial join. Pick the maximum operator as merge rule for the Value field in the field mapping (similar to Merge tool as you referred).

Then dissolve the output of the previous by area and value fields.

I think want you probably want is Union, not Intersect? See this question: How can I keep only the maximal value of two overlapping polygon, keeping also the initial value where they don't?

Not the answer you're looking for? Browse other questions tagged arcgis-desktop features spatial-query or ask your own question.

0
Keeping only maximal value of two overlapping polygon (along with initial value where they do not) using ModelBuilder?

1
OpenLayers vector layer remove all features
7
Deleting Large Number of Features
1
Selecting features based on another feature attributes?
2
How to delete polygons that do not intersect a line using ArcGIS for Desktop?
0
Selecting points intersecting polygon
2
editor clip with multiple selected features
0
How to merge selected features with different attributes in QGIS?
1
Remove the overlapping feature in ArcGIS