Cutting line feature by the nearest point in QGIS

I got a line shapefile and a point shapefile (or a CSV file containing coordinates of the point), and I want to clip this line feature by those point in the 'nearest' way.

So far, I have always used edit function in QGIS GUI to clip line feature manually: 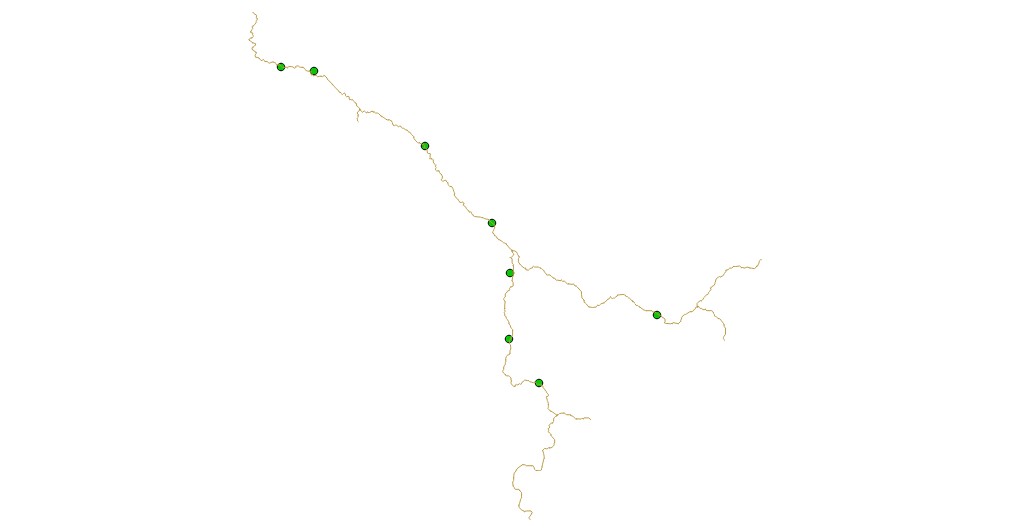 I used PyQGIS code from @xunilk to split line feature showed in figure above, and named my input line and point shapefile as 'my_border' and 'my_point' respectively, but the results looked like:

The result is not what I expect.

Besides, I followed the way in the answer provided by @Micha in splitting a lines layer using points, trying to split line by GRASS.

Because my point is not on the line, I have to run the following module to get 'error point':

I think there are no problem use the first 2 module, but after I used v.clean:

I just got a line feature, not error points: 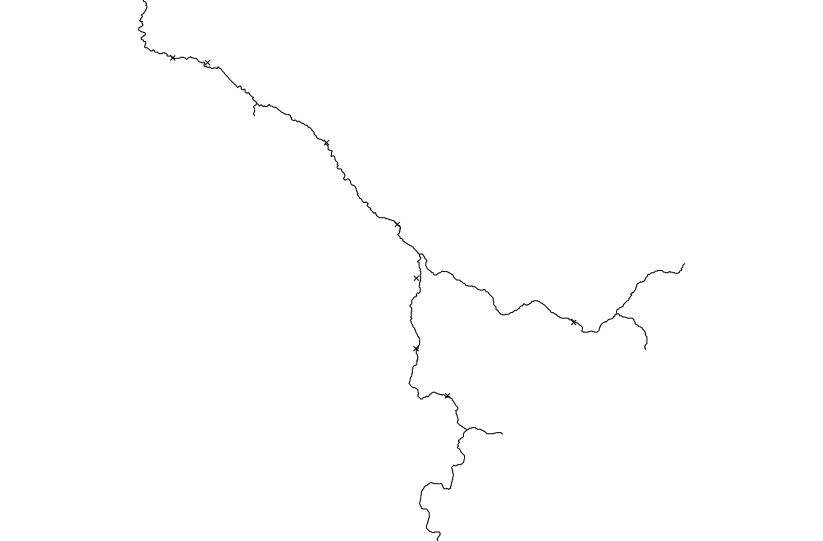 Were there something I missed or did wrong in the procedure?

I used the updated code provided by @xunilk, which trying to handle multiple cut points. I still used my line and point shapefile as input layers, and the following figures are their attribute tables. 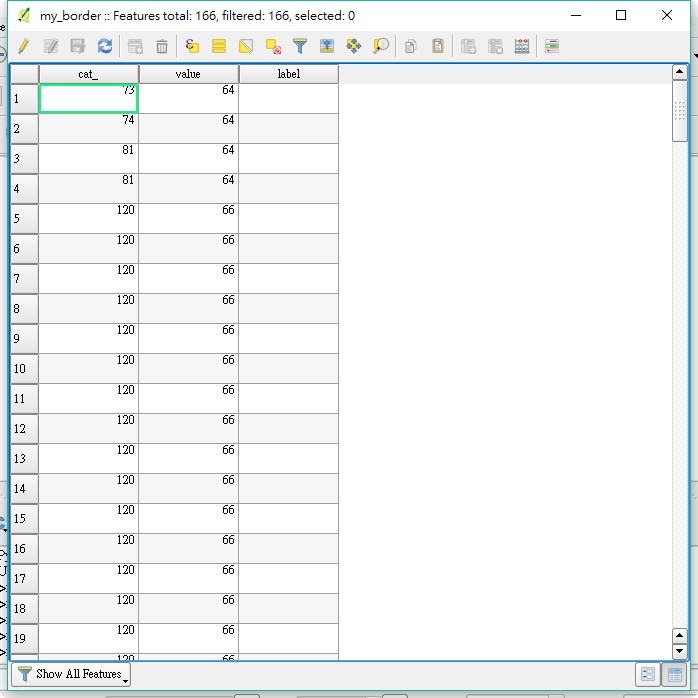 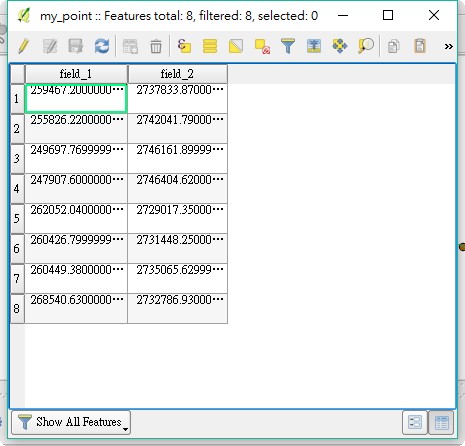 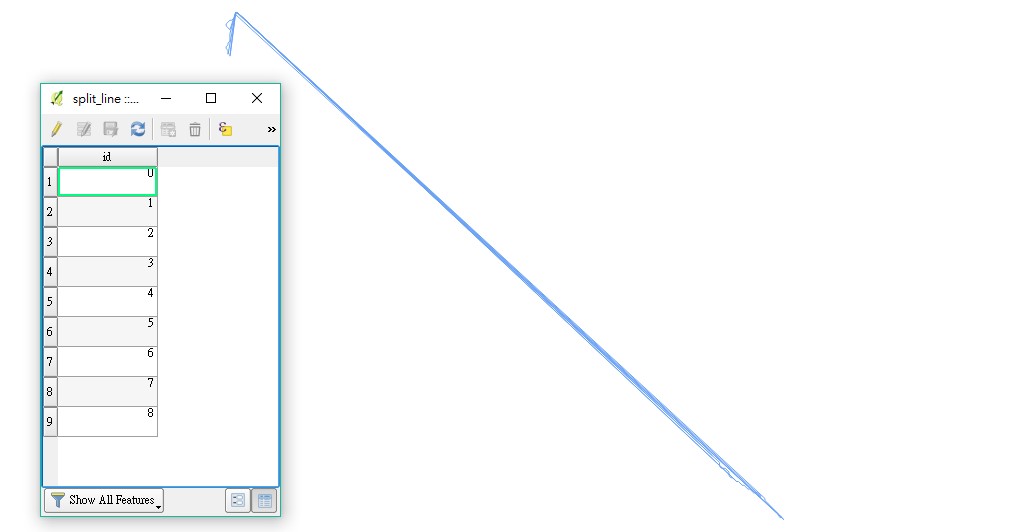 Still not what I expected, I am wondering that maybe it outputted strange line feature because the input line has too many segments.

If the PyQGIS script being modified to capable of handling selected feature of input line shapefile, and before run the script we select the nearest line segment to one point, maybe the output can be right?

This time I edited input line shapefile 'my_border' to a line with only one attribute:

and used PyQGIS code in the edited answer of @xunilk:

This time the attribute of output 'split_line' looked rational because I inputted 8 point to cut line: 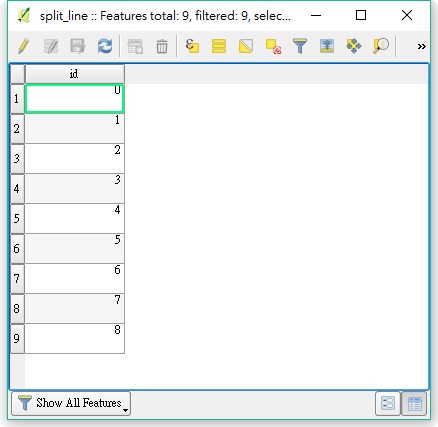 But no matter what I tried including set layer CRS, zoom to layer, show in overview, etc., I could not see this output file. Besides, I saved this output file as a new ESRI shapefile and checked its size, which was 208 kb (input 'my_border.shp' is 21 kb), all seemed to be rational, but I just can't see the output.

You can use closestSegmentWithContext from QgsGeometry. The argument is the cut nearest QgsPoint and, it produces a tuple with the squared Cartesian distance from closest segment to polyline, the nearest point on the segment and, finally, the index of the vertex (at polyline) after the closest segment.

To illustrate the approach, I used next shapefiles for only cutting in two features the polyline layer. 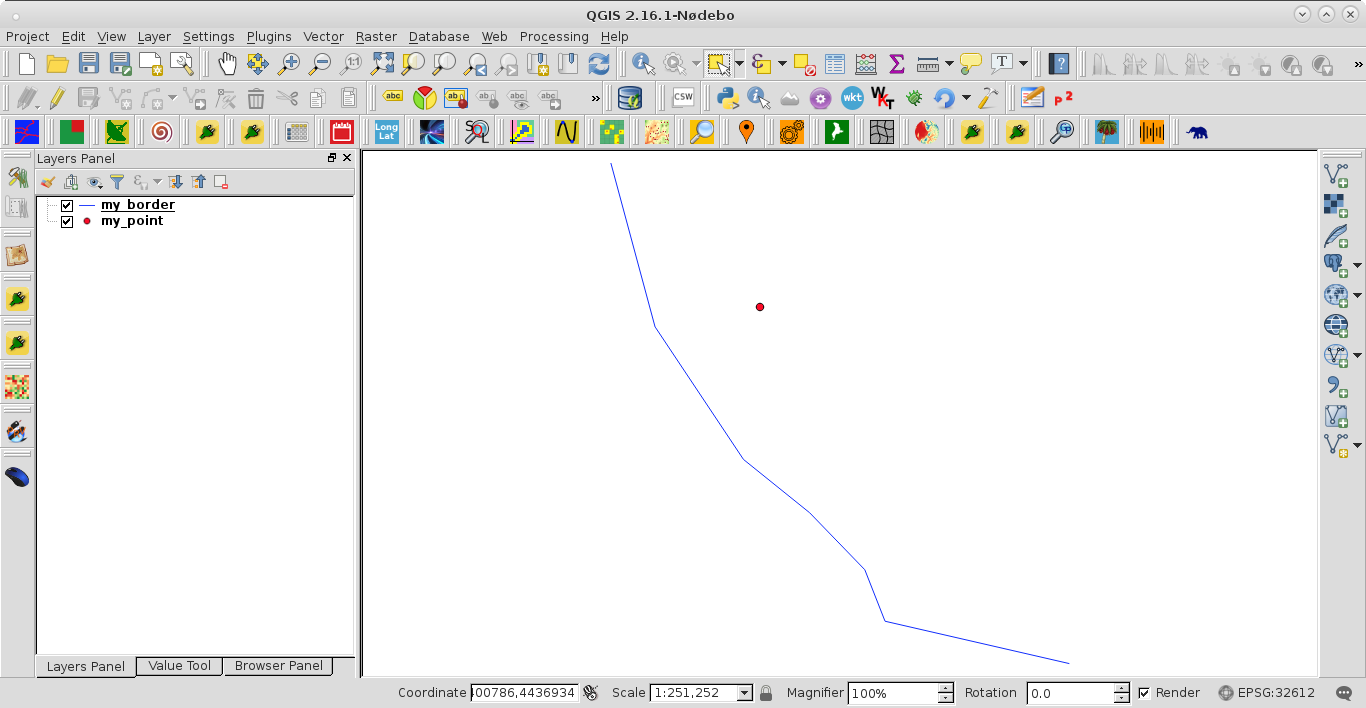 After running it, at the Python Console of QGIS, I got: 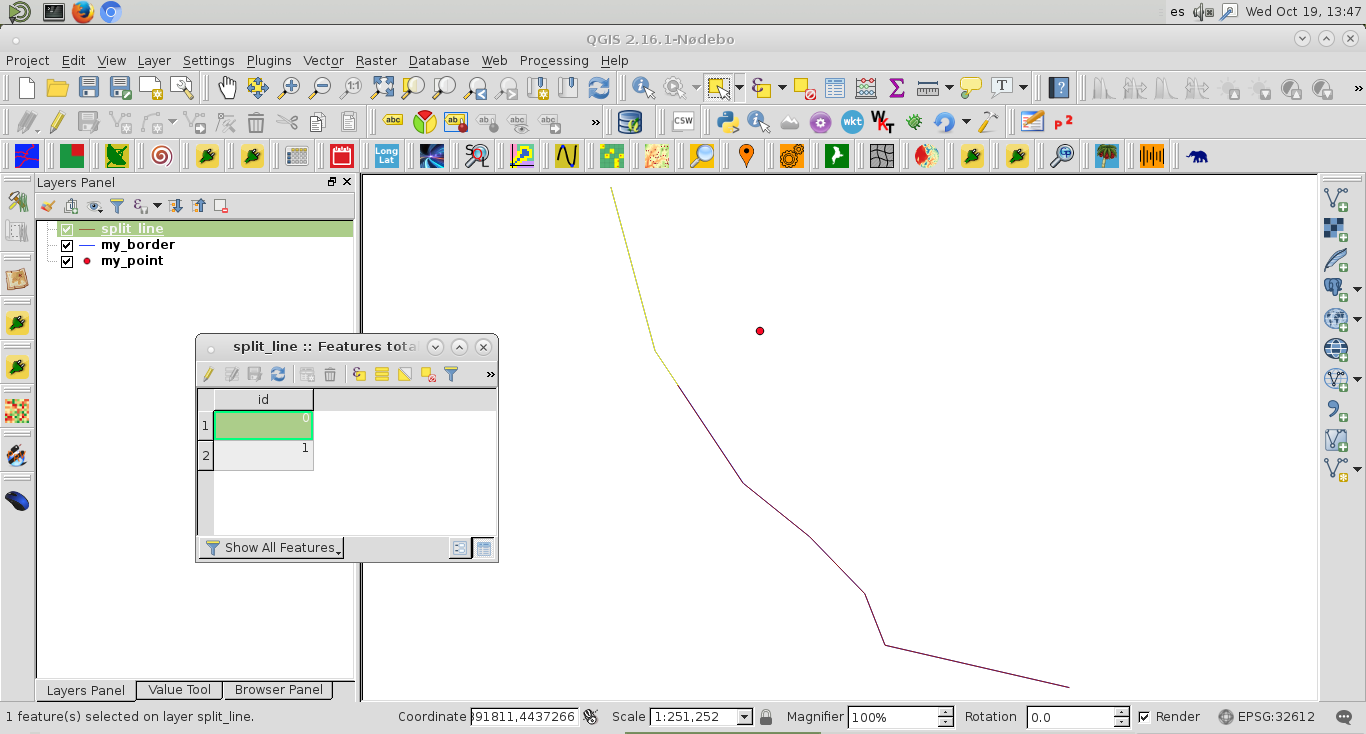 It can be observed the first selected feature at the created memory layer.

When there are more than one cut point, next code (PyQGIS 2) works well:

After running above code at the Python Console of QGIS, I got: 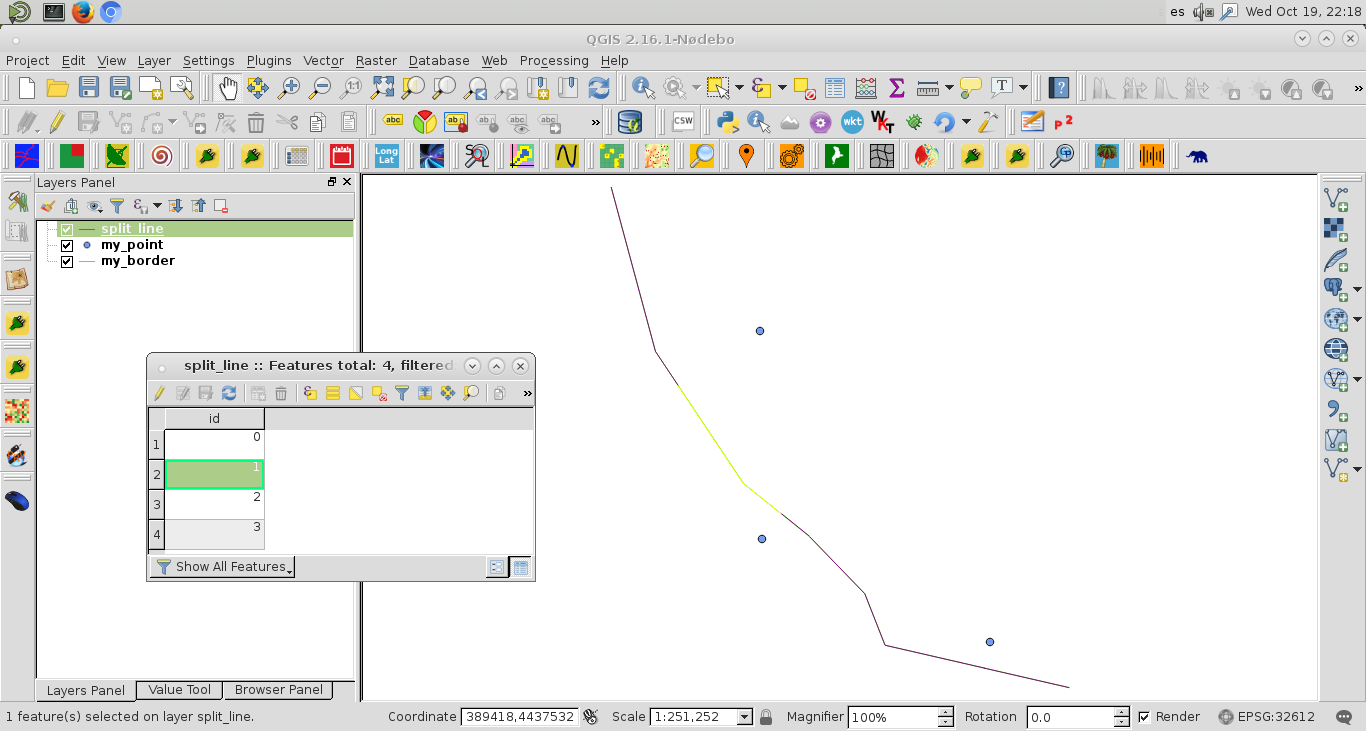 At the image, it was selected only the second feature of polyline memory layer.

I know this wasn't what you asked for but its possible in postGIS. There is ST_LineLocatePoint:

If you have an existing point table that you want to reference to a linear network, use the ST_LineLocatePoint function, which takes a line and point, and returns the proportion along the line that the point can be found.

By now i made a new version of ClosestPoint plugin: version 4.0. for QGIS 3. It's directly available in Qgis plugin repository. This version is experimental so check that experimental plugins are aloud in your QGIS parameters.

This 4.0 version of ClosestPoint plugin does cut lines by nearest points.

It can deal with numerous points projected on a same vertex. This case wasn't delt with perfectly by previous code solutions in this post.

I find another solution using PyQgis, from this post:

The code could be this:

I tried to make such a tool but without the elegant use of line.closestSegmentWithContext(point).

You can find it here: Plugin repository on github

Please, see this plugin attempt to be used with a QGIS 2.18.x version, no lesser one.

Not the answer you're looking for? Browse other questions tagged qgis pyqgis point line splitting or ask your own question.