I have a point shapefile and a CSV file containing various attributes and three columns (here: street,num,addnum) based on which I would like to join both tables like

Since 'Straße' might be abbreviated or not and lower/uppercase might not be used consistent, I generate a virtual field adr for each table upon wich I'd like to build a join by an expression like

I create a join on the point shapefile like this: 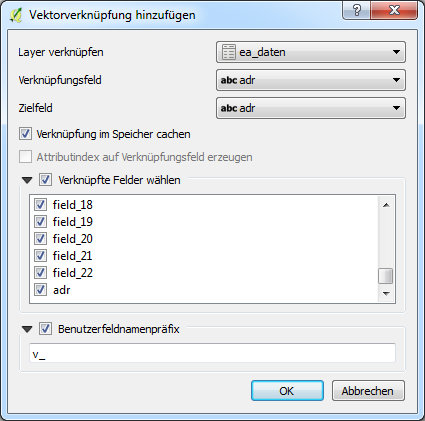 but as a result I get NULL values for the prefixed joined attributes/fields:

What might be the problem? Virtual fields not suitable for joins? [QGIS 2.14.5LTR]

As mentioned in my comment, this works for QGIS 2.16. I also downloaded and tested this on QGIS 2.14.7 LTR and it works too.

So virtual fields are suitable for joins, you just need to upgrade ;)

Not the answer you're looking for? Browse other questions tagged qgis attribute-joins null virtual-field or ask your own question.