I have three points in geographic coordinates (latitude, longitude, altitude). One of the points represents an observer, above the Earth. The other two points define a bounding box. I'd like a somewhat efficient way to determine the minimum and maximum straight-line distance between the observer and the edges of the bounding box. I'm concerned with performance over accuracy, so I'm okay with using the spherical model of the Earth for speed gains. Please see the image for a stunning rendition of the aforementioned scenario. 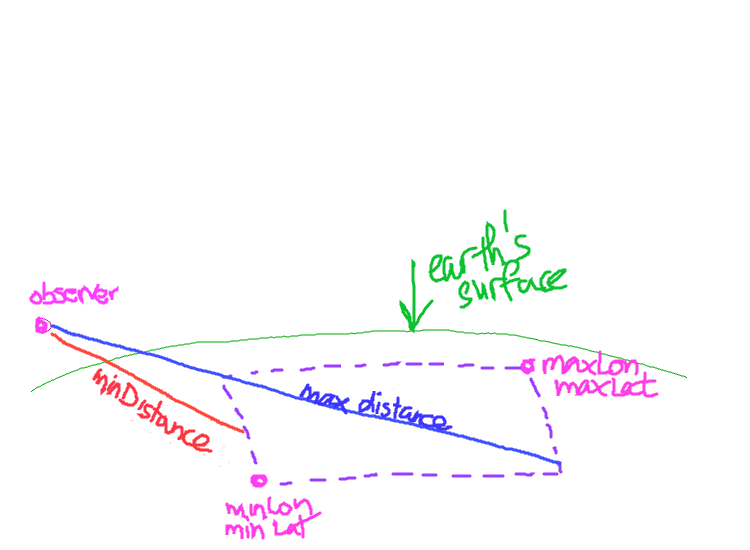 Hi I am not sure how to use GIS for this. But since you said you need speed, you can do some math yourself. You have a point P in space and you have coordinates of that point. You can assume a sphere centered at earth's center. You get P(x1,y1) in space.

Now, in the BB, which is not a box in fact since you got to see the curvature. So a surface which is bound by (Θ1,Θ2) and (φ1,φ2). The point on this surface is Q(x,y) which is actually (rcosΘcosφ ,rcosΘsinφ), r being the average radius of your patch.

with the above stated conditions, find maxima and minima of d. You can infact use MATLAB do solve for the min and max values of d.

The "bounding box" can have several interpretations. The two most natural are (a) the sides are meridians and the top and bottom are circles of constant latitude and (b) the sides are still meridians, but now the top and bottom are geodesics (which therefore do not necessarily have constant latitude). Fortunately, the solution method is the same in both interpretations, because in all cases the sides are portions of circles. This reduces the problem to optimizing the distance between a fixed point x and an arc of a circle (in three dimensions). Do this for each of the four sides and retain the best results.

A simple way to represent the arc of a circle is to choose coordinates for x in which the circle's center is at the origin, the circle is determined by two vectors e and f of equal length (say, r) and at right angles to each other, and the arc is given by all points of the form cos(q) * e + sin(q) * f for angles q ranging from q0 through q1. Critical points for the optima occur either at the endpoints of the arc or where the tangent vector is perpendicular to the direction vector. The latter tells us the inner product of x - (cos(q) * e + sin(q) * f) with (-sin(q) * e + cos(q) * f) is zero. This easily reduces to the equation

In this fashion you collect (in most cases) up to two critical points per side plus the four vertices of the bounding box: that gives between 4 and 12 distance calculations to make in order to find the largest and smallest distance. These are 3D (Pythagorean) distances: compute them using the Pythagorean formula, but don't bother to take square roots when comparing; just take square roots for the largest and smallest distances. 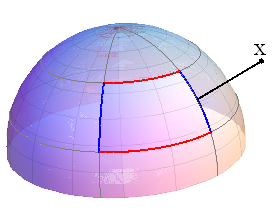 Portions of the four circles determined by the sides of this bounding box are shown in gray. The arcs of latitude are in red and the arcs of the meridians are in blue.

Not the answer you're looking for? Browse other questions tagged distance algorithm spherical-geometry extents c++ or ask your own question.

14
How do I calculate the bounding box for given a distance and latitude/longitude
6
Finding distance in meters between point and path in lat/lon using GeoTools?
2
For Loop Maximum Minimum Distance Between Two Lines
2
Creating Lines in Bounding Box at specified distance apart?
0
Inputing minimum X, maximum X, minimum Y, and maximum Y to create bounding box feature using ArcPy