How do I draw the shortest imaginary boundary around a point dataset?

I would like to produce a range map for my species (smooth snakes in the south of England) using the IUCN-defined 'extent of occurrence' (EOO) as my metric. EOO is defined as 'the area contained within the shortest continuous imaginary boundary which can be drawn to encompass all the known, inferred or projected sites of present occurrence of a taxon, excluding cases of vagrancy'- see below where A is the location of all records and B is their extent of occurrence:

I would like to do this in ArcMap 10.3.1 if possible. I first tried it using the 'Minimum Bounding Geometry' tool (Data Management) but this just produced a square polygon encompassing all records rather than the 'shortest continuous imaginary boundary' that I need:

After some research I concluded what I probably needed to do was to create a concave hull, for which I found Richard Fairhurst's 'ConcaveHullByCase' tool (I was not able to post a link as I had already included two images - not sure why this restriction exists, surely adding links and screenshots helps to illustrate/clarify a point and it for everyone's benefit?)

The result I got from this is not quite what I'm after either, however. Firstly, it does not encompass all points. Secondly, it draws a line between all points, rather than the shortest continuous line as in example B above. It also creates a 'polygon within a polygon' (white rectangle within turquoise rectangle, see below) that I don't fully understand - it does not appear in the output's attribute table but seems to be a separate feature: 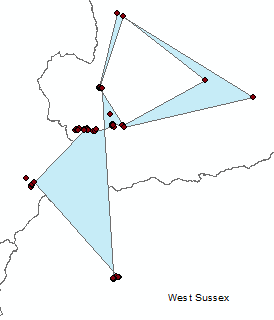 Is there a solution to my problem besides manually drawing these polygons myself?? Apologies for the rather descriptive/untechnical way I'm phrasing this, I'm still a novice and had to look up the difference between convex and concave before posting this, which should give you an idea of how much I still have to learn.

You want Convex hull which is an option in Minimum Bounding Geometry. ArcGIS for Desktop Advanced license is required.

Not the answer you're looking for? Browse other questions tagged arcgis-desktop extents polygon-creation convex-hull concave-hull or ask your own question.

20
Finding boundary co-ordinates from given set of point co-ordinates?
1
Displaying only points within a polygon I created in QGIS?
3
Making Outside Buffer in QGIS?
11
Creating Complex Polygon from Point Layer using only Boundary Points in ArcGIS Desktop
0
How to draw a polygon around the point with condition in ArcMap?
1
Determining coverage of polylines within polygon using ArcGIS Desktop?
0
How to create quadralinear polygons around a set of points