How to automatically update WFS edits with a user id?

So I have a WFS layer on QGIS, served by geoserver from a postgis table that around 10 to 20 people contribute to by adding new features or editing existing ones. I have a column called creator but not everyone bothers updating it and it would be most useful to see which user did what edit.

I was able to add a column that automatically gives the date but I wonder if it would be possible to have the creator column being automatically updated depending on the user.

Would different projects do the trick or is there another way?

Edit: I have a table with ids 1 to 24 on one column, and their corresponding names on the second column but trying to figure out how to use QGIS's apparent new feature to do this

Edit2: there seems to be a 2.18 QGIS bug while working with WFS, sometimes the layers don't want to show up and this happens to several users. If there's any other solution that doesn't involve 2.18 it would be most helpful

Since QGIS 2.18, go to fields in the layer properties, click on the edit widget button for the field you want to configure and set the default value to @user_account_name (or whatever other variable you would like to use). 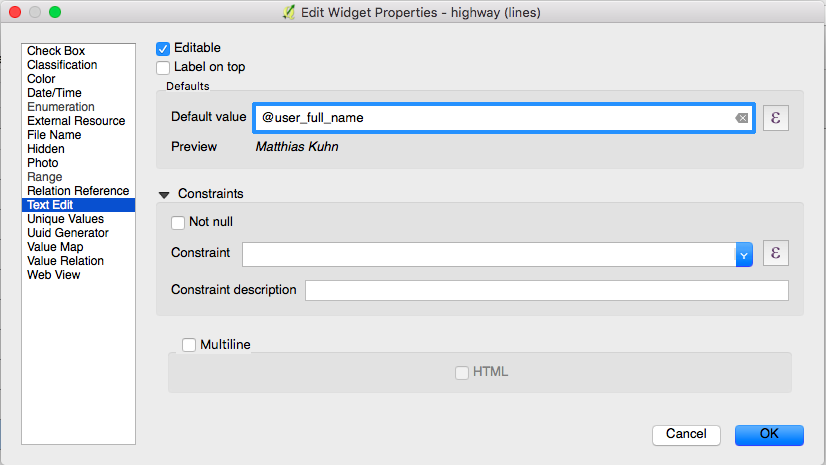 You can either use one of the pre-defined values extracted from the operating system. Or set a new global variable. Or set a variable on the project.

If every person has its own database account that s/he uses to connect to a database, then current_user from system information functions is what you're looking for, together with a INSERT/UPDATE trigger.

If all the people share the same database username, I doubt there's any other way.

QGIS provides you with two variables user_account_name and user_full_name which you could use to populate your created by column. Depending on how your editing is managed you should be able to set some sort of automatic function to fill it in on edit.

Not the answer you're looking for? Browse other questions tagged qgis postgis geoserver wfs or ask your own question.

5
What's role of WFS-T in webapp?
1
Update Point using WFS Transaction with GeoServer
3
How can I create a WFS from netCDF file(s)?
0
WFS protocol - Update method
2
QGIS feature subset with WFS
2
WMS/WFS layers from QGIS 2.12 projects fail when loading the project in QGIS 2.18