How to align edges of overlapping polygons in the middle line?

Here are two polygons that overlap. 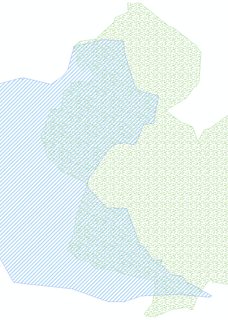 My ultimate goal is to reshape the grassland (green poly) and the reservoir (blue poly) so they share the edge somewhere in the middle of their intersection. It is acceptable if there would be a certain gap between the borders as long as they are not overlapping. 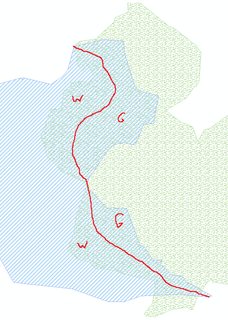 I have drawn the red line manually to illustrate the imaginary central line that splits the shared area into two equal (or roughly equal) pieces. The end result would look like this then (after merging): 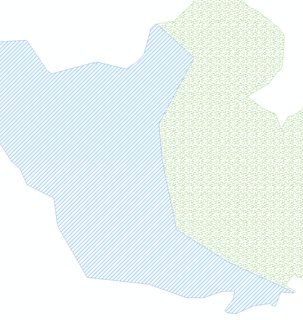 Each polygon's shape was increased and they "are meeting in the middle".

I need to be able to do this analysis on any pair of overlapping polygons in an automated fashion. I am open to any existing solution. I am able to pull my data from an Esri geodatabase into other formats and do the processing somewhere else. If there are hints on the code libraries or tools for this kind of problem, I would be happy to learn more about them.

There are some tools related to edge matching that exist in ArcGIS, mostly topology related. None of them supports splitting the overlapping polygons; they only allow choosing to what edge a polygon should be aligned to.

I got some crazy ideas about creating the longest central line over each polygon that would result when intersecting the water body and grassland, but I cannot really think through this using limited computational geometry knowledge I have. I guess the longest line that would split the polygon into two roughly equal parts would not always be the correct line I need to use.

I have started considering converting the polys to raster and reclassifying the overlapping pixels using an interpolation method (how far each pixel is from water and grass pixels), but can't figure out a workflow for doing this using ArcGIS Spatial Analyst tools.

Are there any good ideas on how to solve the problem?

If you follow these steps, you should end up with the polygons split at the center of the overlap, as illustrated by your third image in your question.

Here is a code that uses centreline lable (https://github.com/ungarj/label_centerlines) library which can potentially solve your problem. Note this works pretty well with two polygons, but anything over three polygons becomes more difficult. The list of polygons consists of polygons in shapely Polygon format.

Not the answer you're looking for? Browse other questions tagged arcgis-desktop polygon geometry topology alignment or ask your own question.

13
Calculating maximum distance within polygon in x-direction (east-west direction) in PostGIS?
8
Extracting centerline of a Complex-Polygon in PostGIS/Python
5
How to reclassify raster inside polygon mask, leaving values outside as they are?