I would like to load an AFR file into a data frame in a currently open MXD and the IMap.AddLayer function is not working as expected if the data frame in which to load the AFR file is activate.
And I need to do all this with ArcObjects and from a Python script tool in a toolbox.

Here is what I do:

And it is Step 3 that is not working properly: the layer created from the .afr file quickly shows up and then disappears. Which means it seems to be added but does not remain in the data frame, in the table of contents.

At first I thought that the problem came from the .afr file I was not generated properly. But I further investigated and found out that even with a very simple layer addition the IMap.AddLayer function was not working if the targeted data frame (map) was active. 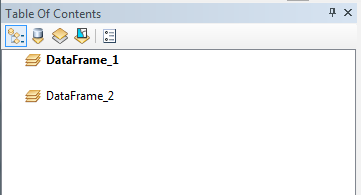 The raster layer is then supposed to be loaded in "DataFrame_1", which is the active data frame. But it is not.
During the process it shows up very quickly but does not remain loaded in the data frame. Also, I discovered that if "DataFrame_1" is not active, the layer is properly added. Weird!
Last important point: when this code is run directly from the Python window in ArcMap, it works properly whether the target data frame is active or not.

Did someone already encounter the same problem?