I have a Geodatabase full of featureclasses. I want to perform the following:

Therefore, for each of my featureclasses, my end result would be 1 seperate folder housing 1 shapefile (same name for both folder and shapefile).

I am fairly new to Python. 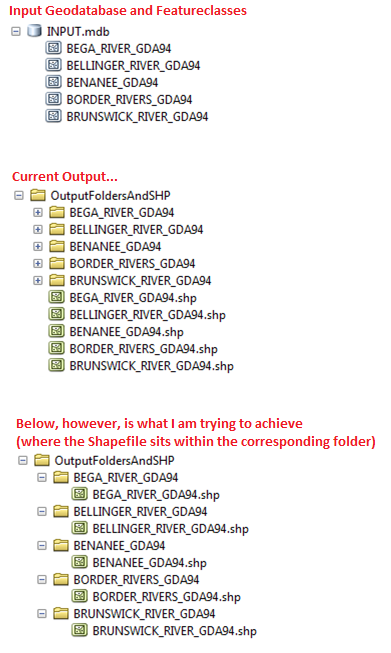 You need to specify the output shapefile. So the last line should be

That should create the directory structure you're looking for.

I tested this and outSHP returns the path to the folder.

1
How to match two feature classes with same geography and use part of the name of one to name the other
0
Adding all feature classes of same name to mxd in ArcPy?
1
Intersecting two shapefiles from different folders based on their name using scripting in ArcGIS Desktop?
0
Merging shapefiles from subfolders to corresponding new folder using ArcPy?
0
Adding a field to attribute table and populating using a list
1
Using Python to iterate through folders and join like shapefiles, based on name
0
Optimizing combining multiple feature classes into one via arcpy
0
Need to convert feature classes regularly deleting/overwriting existing shapefiles and breaking the script to terminate