I have a puzzling problem using GeoTiff rasters which have been generated using Python + GDAL functions. When these grids are "Sampled" (ArcMap 10.4.1 Spatial Analyst Sample command), some rows of data contain either Nodata values, or in some cases very small or large negative values where there should be valid data values.

This occurs when sampling a grid, using the grid itself as the location of points to be sampled. There are no errors or warnings reported by Sample.

This image shows the X, Y values output for a grid (using Sample tool) which has been loaded into ArcMap with the values symbolised to show NoData (-9999) values in red. The output points all have the correct coordinates, and there are not gaps apparent. However, when symbolised to the value of the underlying raster, you can see the values in two lines across the grid either appear with NoData values, or in the case of the lower line, contain values which are not the same as the surrounding grid values that would be expected. Inspecting the individual values in those rows, none of the extracted values correspond to any of the grids being sampled at that point. The lines are 140 m apart (70 rows of 2m grid) 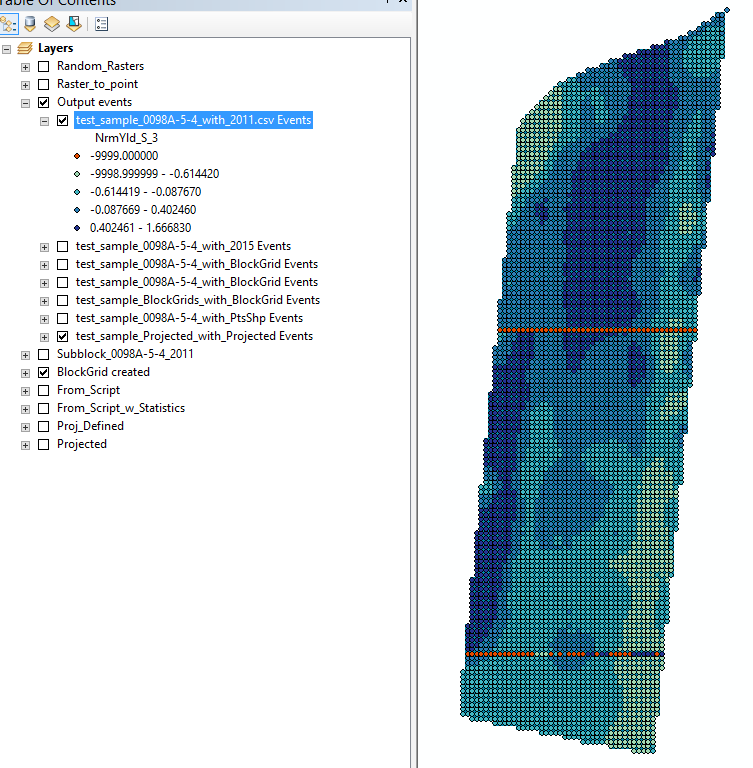 Initially I was sampling several grids at the same time, but I found that I could reproduce the problem using only one of those grids at a time. I have tried many things to find a cause/solution this including:

but these do not work.

Two things that DO have an effect are

This suggests there is something going on in ArcMap's interpretation of the grid projection, which was based on EPSG in the GDAL functions. I am wondering if anyone has seen this issue with ArcGIS 10.x, and would like to know if there is a way I can resolve this in the Python GDAL functions used to generate the grid (or perhaps is this an ArcMap bug?).

There is a documented bug corresponding to your issue:

Bug BUG-000093811 - The Sample tool produces an erroneous output when a raster is used for the sample locations and the processing extent is set to the display extent.

So try modifying the processing extent, and if it doesn't work then converting the raster to points as you've done is probably the only solution...

In Dec 2016 I interacted with ESRI about this issue. In the process of investigating the problem we showed that that if you first reproject the raster (even if to the same projection it was already in) the problem was resolved. Alternatively you could export the raster to a new file. So if you want to sample a raster and you’re seeing this issue, either of these pre-processing steps in ArcMap should get around the issue.

Not the answer you're looking for? Browse other questions tagged arcgis-desktop gdal coordinate-system spatial-analyst geotiff-tiff or ask your own question.

3
USGS GeoTiff extent via GDAL
2
Remove values below a given value with GDAL for DEM geo tif files
2
gdal RasterizeLayer gives different extent to arcpy PolygonToRaster
7
How to remove nodata values from XYZ output with GDAL?
4
Is is possible to have some 0-value pixels as NoData while others not in GeoTiff using GDAL?
1
Error using GDAL to Export Raster to GeoTIFF
0
GDAL Translation gives incorrect GeoTIFF Projection
1
Converting GeoTIFF to array of normalized (0 - 1 range) values using C# GDAL Nuget Package