I got coordinates to old survey data in an Excel Spreadsheet. The coordinate system is unknown. I enter the values into a proprietary system to display them in module using Google Earth. I tried to guess the coordinate systems, since I know roughly the physical addresses of the locations in question, but none of the standard systems plot even remotely accurately. (NAD 83 UTM 11N, State Plane AZ Central/ NAD ft, NAD27 UTM 11 N, etc....)

Sadly, I don't have ArcGIS, and I am stumped. Can anyone help, or recommend some means of ferreting out an answer? Most online forums seem to discuss only shape files.

Here are some examples:

The data is in State Plane, Arizona Central, units are international feet (or possibly US survey feet). The "Lat" is the northing/Y value, and the "Long" is the easting/X value. Hopefully, you have a typo in the first Long value, as it should only have 6 digits. The first pair is a bit north of Laguna St, and the other one is right on Roger Rd.

Here's what I did to come up with State Plane Arizona Central as Melita has suggested:

Geocode one of your addresses using the 'geocode' plugin (uses Google)

Bring in the Google Streets basemap using the OpenLayers plugin

So now comes a bit of trial and error, but at least you know 'where' you should be.

Using the Identify tool, you can click the geocode result and expaned the (Derived) node to see the coordinates you have in your example: 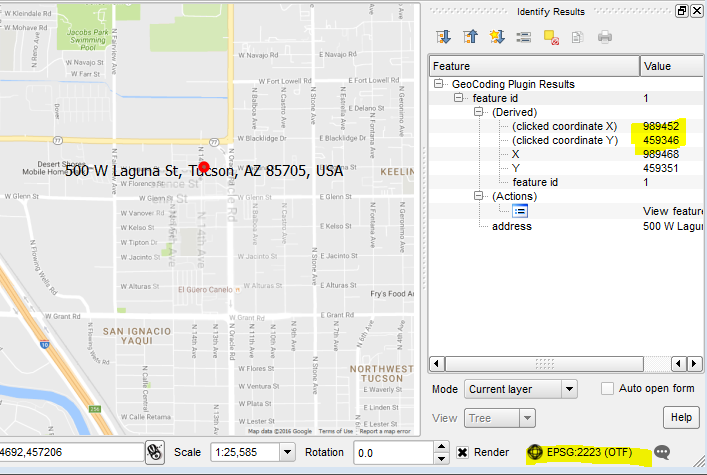 Note: I think there is some kind of typo in your coordinates... as Melita has pointed out, and as you can see, the #'s are almost identical (with the exception of the typo) - off by a few feet, yes, but that could be the difference between the Google Geocoder and what I assume are GPS coordinates from your source data.

You can also copy/paste your coordinate pairs into the box in the bottom of the QGIS window and see where they take you (note your map coordinate system has to be set as in the screen capture) and also note that this is in LON/LAT rather than LAT/LON, and I removed the last '2' in the first Long value you shared...

Note those coordinates are just where my mouse was when I took the screen shot, but they are in the same format and area of your coordinates...

Not the answer you're looking for? Browse other questions tagged coordinate-system excel united-states or ask your own question.